Chicago Loop Alliance (CLA) will launch its second Activate event of the year with Wasteland: Dispose and Discover on Wednesday, July 26 from 5-10 p.m. at the Chicago Theatre alley (enter on Benton Place at State St).

The 2017 Activate series invites the public to explore the pulse of daily life that the alley embodies. Art and programming will focus on a different aspect of alley life for each event. Wasteland explores the alley as the space where we dispose of unwanted stuff – and discover discarded objects that continue to hold value. Through a series of interactive art installations using discarded objects and trash receptacles as the primary materials, the event highlights the story of our trash and the alley’s role as garbage hotspot.

​The identity of the practical, hardworking alley is inextricably linked to trash. Chicagoans, who each throw out about one ton of garbage per year, make frequent trips to the alley dumpster. But, as the old adage goes, “one man’s trash is another man’s treasure.” Picture an alley picker’s excitement to find an old footstool lounging by the trash can. Imagine a scrapper stacking old pipes and a rusty stove in his retrofitted pickup.

Curators Duncan Bindbeutel and Desmond Naranjo, along with Missy Perkins and John Ibarra, have created an array of installations and activities that highlight the alley’s main function: a wasteland for the discarded. They include: Flametube, a kinetic sculpture designed by Joshua T. Gilbert made of repurposed materials (such as recycled cell phone chargers and salvaged car components) that shoots flames in response to musical input; Mystery Cans from artist Kelly Wyatt, whose contents will mystify patrons as new and mysterious forms emerge from not-so-ordinary trash and recycling cans throughout the night; and Propagation, a robotic flower made of reclaimed materials and cutting-edge 3D printed components, programmed to move, grow, and respond to the audience from industrial designer Steven Krejcik and software developer Paul Kirby.

​During the event, Chicago brass band and performance art group Environmental Encroachment will use a mobile band, costumes, and antics to create unique entertainment environments. Its mission is to create playgrounds for the body and mind through dance, music and art. Also on the bill will be  Attack the Sound, a self-described “soulfully influenced experimental band,” made up of a group of young Chicago-bred musicians that defy the limits of genre, known for unforgettable live performances and sounds that break barriers. An assortment of interactive low-footprint activities will also take place to engage audiences during Activate Wasteland.

The Portal, a monumental structure overlaid with an illuminated scene of alley activities will return once again to amplify the Activate experience. By their very nature, alleys are voids – the space between buildings. The Portal is meant to provide a sense of arrival and put the alleyway in play with the streetscape. Designed by PORT Urbanism, the structure will display a photo montage comprised of contemporary and historic images to support each theme, inspiring passersby to give an alley a second glance and wonder about its history.

The remaining 2017 Activate events on August 24 and September 28 will explore the alley as a channel pulsating with power lines and a hideaway where people can cavort and misbehave away from the eyes of the street. Dates are subject to change. Specific location and event details will be announced two weeks prior at loopchicago.com/activate. 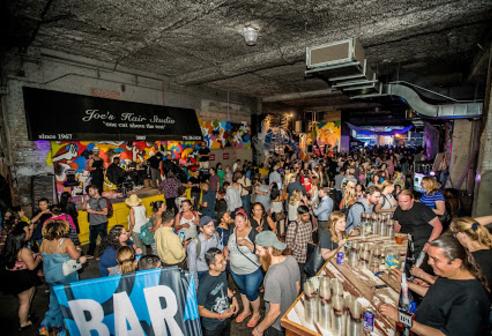 Chicago Loop Alliance will be celebrating with a low footprint in the latest iteration of its Activate series, which explores the pulse of daily life that the alley embodies.