Adler Planetarium to Celebrate 2017 as the Year of the Eclipse

On August 21, 2017, a total solar eclipse will occur in the United States—the first in 38 years.  The path of totality will begin in Oregon around 10:15 a.m. PST and make its way east to South Carolina before heading into the Atlantic Ocean at approximately 2:50 p.m. EST. For people in the “path of totality,” the Moon will block out the mid-day Sun completely for nearly three minutes.

​While Chicago is not in the path of totality (the track of the Moon's umbral shadow across Earth), at 11:54 am. CST, the Moon will start to block Chicago’s view of the Sun, covering up to 90 percent of it and creating a spectacular sight. The last time Chicago was this close to the path of totality for a total solar eclipse was over 210 years back in 1806.

The path of totality will make the eclipse visible from several major highways and cities in the middle of the day during a time of year when many people are on vacation and enjoying outdoor activities. Because of this, the 2017 eclipse may be the most viewed solar eclipse ever.

In celebration of this rare celestial occurrence, 2017 is The Year of the Eclipse at the Adler Planetarium. The Adler will be drumming up excitement and giving people the tools they need to make the most of the event.

A new temporary exhibit entitled Chasing Eclipses will immerse visitors in the spine-tingling, goosebump-inducing experience of a solar eclipse. Visitors will find inspiration in eclipse chasers from history, discover the cosmic scale of being in the shadow of the Moon, and prepare to chase down the great solar eclipse on August 21. This exhibition,  which is included with general admission, will be open to the public from March 25, 2017 through January 7, 2018.

​The Adler invites everyone in Chicagoland to view the eclipse at the museum. Again, Chicago viewers should be able to see the eclipse at 90 percent totality. Guests will receive free solar viewing glasses, participate in eclipse-related activities, talk with Adler experts, and share the experience with 10,000 other space enthusiasts.The Adler Planetarium is partnering with Southern Illinois University to provide eclipse-day programming in and around the SIU football stadium. SIU is located in Carbondale, Illinois, which is directly in the path of totality (where the Sun will be covered completely). SIU staff estimate that up to 50,000 visitors from Illinois and beyond will join the celebration. Tickets and information are available at eclipse.siu.edu. 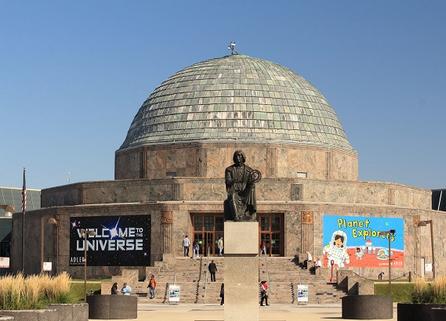