The Adler Planetarium's Destination Solar System offers visitors a futuristic tour of the universe based on new and accurate visuals of the cosmos, all narrated by an actor and a artificial intelligence-laden shipboard computer (photo courtesy of the Adler Planetarium).

In what has to be the most dramatic planetarium show in this (or any other) cosmos, The Adler has harnessed the sheer power of their high-tech Grainger Sky Theatre, along with a bit of theatrical finesse to pull off Destination Solar System, the latest in its slate of state of the art sky shows that place the viewer squarely in the midst of the galaxy in which we live. The twist? This show takes place in the year 2096. And that’s where it gets theatrical.

In stunningly vivid detail, Destination Solar System takes the viewer on an immersive and imaginative adventure, hundreds of millions of miles in the making, on a wildly adventurous tour the cosmos. Led by Jesse, an enthusiastic, knowledgeable—but inexperienced—tour guide, and Max, a highly advanced, fully integrated onboard computer, viewers of all ages get a chance to tour the hottest hot spots and the coldest, stormiest and most incredible sights in the Solar System because…well, that’s what they do in 2096.

And why not? Space tourism has been in the news for years now. Even now there are individuals lining up to ship off to colonize Mars on a private expedition that admits it may not return. So re-imagining the standard planetarium sky show experience in a more theatrical, immersive manner really is a great way to not only entertain but educate.

“The Solar System is our cosmic backyard,” noted Michelle B. Larson, Ph.D., Adler Planetarium president and CEO. “And we shake up what seems familiar by taking you to exciting and wild places right next door. This show explores our celestial neighborhood in a visual and entertaining way that is fun, scientifically accurate and sure to be memorable.”

And because it’s the Adler it’s not just a show. Presented live by a trained actor in the role of “Jesse,” Destination Solar System features world-class simulations relying upon scientific data from current planetary space missions. With Breathtaking visuals—many never seen before—Grainger Sky Theater technology enables visitors to explore space as if they were actually there. In Destination Solar System, instead of audiences being relegated to passive observers, they become active explorers immersed in their own personal space journey.

As Adler astronomer Mark SubbaRoa, Ph.D. pointed out, now is the perfect time to get theatrical about space exploration. “We are in a golden age of planetary science right now,” said SubbaRao. “There has been an incredible amount of exploration and discovery in the Solar System over the past several years, and we’ve developed new visualizations of the latest scientific data to immerse audiences in these different worlds—which are real and exciting places.

SubbaRoa is director of the Space Visualization Lab that rendered much of what you see in the new show.

The journey experience begins at a futuristic spaceport in the Adler’s Clark Family Welcome Gallery. And the show starts before you even realize it. Passengers move through a space portal to enter the Grainger Sky Theater, board their “Space Express” ship and prepare for launch.

A surprisingly realistic vertical launch takes the ship through Earth’s atmosphere into orbit, where passengers get an awe-inspiring view of their home planet through the 35-foot viewing dome overhead. Then it’s off to the Moon to explore the site of the first lunar landing. Through the heart of the Solar System to the depths of Valles Marineris—a canyon that stretches one-fifth of the way around Mars—visitors continue their immersive journey through the Asteroid Belt making stops at Jupiter and Saturn with Jesse and Max navigating them through the experience along the way.

Nothing is really left to chance in this dynamic live encounter. And that’s because it takes the scientific experience of universal exploration (something typically done only through powerfully imagery) and imbues it with memorable live theater that pulls you right into the process.

The interactive “live tour” element the show provides personalizes the whole experience for the viewer. And it does so in such a way as to create a channel through which viewers are better able to digest (and, yes, even retain) the knowledge presented , taking you far beyond the standard plug and play museum encounter. As SubbaRoa put it, in Destination Solar System, “…we’re not just presenting science, (we’re) inviting you inside the experience.”

You can get inside the experience of Destination Solar System daily at the Adler Planetarium on Chicago’s Museum Campus, just south of the Loop. Admission is included in the Museum’s All Access Pass. For more information, visit adlerplanetarium.org.

Transgalactic Journey
Adler Planetarium gets downright theatrical in taking visitors on its newest tour of the cosmos. 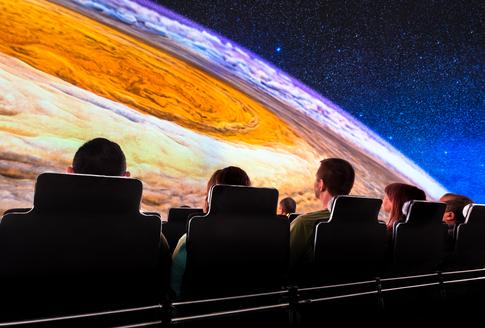