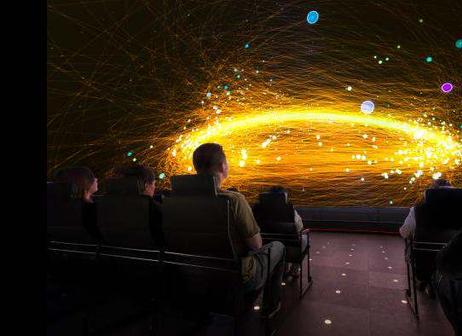 Scene from the newest Adler Planetarium sky show, Planet Nine, which takes visitors on the search for a new planet.

The Adler Planetarium’s newest sky show, Planet Nine, was recently selected by the National Science Foundation (NSF) and Popular Science as a Vizzie award finalist. The Vizzies, formerly known as the the International Science and Engineering Visualization Challenge, honor the most illustrative and impactful visualizations from the worlds of science and engineering. Celebrating their 15th anniversary, the Vizzies blur the line between science and art, and recognize visualizations of scientific phenomena in the form of photography, illustration, posters and graphics, video and interactive. NSF and Popular Science have determined the top 10 entries in each category, and Planet Nine has been named a finalist in the video category and is up for a People’s Choice award.

Planet Nine opened at the Adler Planetarium in May of this year and explores the largest of Pluto’s neighbors in the Kuiper belt, inviting visitors to join in the search for a new ninth planet. Viewers follow “Pluto Killer” Mike Brown and his team of scientists at CalTech as they hunt for a planet that may be hiding deep in the outer solar system. If you have been at the Adler Planetarium and have seen the impressive sky show, you know that it is the breathtaking visualizations that help tell the trues story.

Chicago fans of the Adler can show the rest of the world how truly spectacular Planet Nine is by casting their votes for the People’s Choice award.