Hubbard Street Dance Center buzzes with energy, as though the early spring sunshine has been unleashed inside, on the brisk April afternoon when I met Alejandro Cerrudo, the company’s resident choreographer. We have arranged an interview at the center, on Chicago’s near west side, to discuss his latest premiere for Hubbard Street Dance Chicago’s (HSDC) Summer Series. The performance is slated for June 5-8 at Harris Theater for Music and Dance. Although I had never spoken with Cerrudo before this meeting, I easily recognize his wiry frame, brooding eyebrows, and impish smile as I approach the conference room where we would discuss his work.

Settling in for our conversation, Cerrudo seemed quite at home in his surroundings. After all, the prolific choreographer originally hailing from Madrid, Spain, has been a part of HSDC since 2005, when he joined the company as a dancer. Cerrudo’s choreographic talent quickly catapulted him into the role of Hubbard Street’s Choreographic Fellow in 2008, then on to become the company’s first Resident Choreographer in 2009.

Even as Cerrudo focuses primarily on HSDC, both as a choreographer and as a dancer, he continues to create works for other major companies and artists around the U.S. and the world. In fact, just this season he has been incredibly busy both in Chicago and elsewhere.

Recently, Cerrudo won the Joyce Theater Foundation’s second Rudolf Nureyev Prize for New Dance, which resulted in a commission for his work “Memory Glow,” premiered by Pacific Northwest Ballet in March. Cerrudo also worked with New York City Ballet principal Wendy Whelan to choreograph for and perform in “Restless Creature,” a series of original duets that premiered at Jacob’s Pillow Dance Festival in 2013. The work was intended to tour this season (before performances were postponed as a result of Whelan’s recovery from hip surgery).

When asked how he manages such a heavy plate, Cerrudo shrugs as though the incredulous amount of work he’s producing is nothing to fuss over. “It’s just scheduling,” he insists. He is quick to acknowledge with gratitude, however, the flexibility Glenn Edgerton, HSDC’s artistic director, has afforded him: “What's great is that Glenn is really allowing me to do both (dance and choreography) and lets me go from time to time to do choreography in other places.”

As he speaks, one begins to notice how Cerrudo’s limbs move expressively, animating his charming stories and descriptions, which seem as unpretentious and refreshingly honest as the choreographer himself. Like many dancers, he is constantly in motion even in his seat, folding a leg under, leaning forward, slouching back, or tugging at his hair.

Delving into his work, the first details unearthed are those that will paint a picture of the premiere he is producing for HSDC’s Summer Series. Two months out from the debut date at this point, Cerrudo warns, “It's so early that anything that I might tell you might be a lie. Because things can change.”

This piece will be the 13th that Cerrudo has created for Hubbard Street, and he is emphatic that the one thing he definitely has planned is to take risks for himself and try to go to a place where he hasn’t gone with his work before. It’s something for which he says he always strives, but notes that this time, now that he feels more established as a choreographer with the company, it’s very different.  “I feel this time I’m trying to take a bigger step than I have before,” he explains.

“I feel very lucky. I think my work has been working well with Chicago audiences, and so I feel this is the moment. I think I always take risk, but I guess it has taken all these works (for HSDC) for me to say, okay, don't worry about failing, just try. Just try to break through and find new ways, new things.”

At this many weeks out ahead of the debut date, the work is still nebulous, only starting to take shape in the choreographer’s mind, let alone in reality. Rehearsals for the piece have just begun, and Cerrudo conveys the goals of these early practices.

“Particularly in this piece, I'm trying to make it really a collaborative process (with the dancers)…. At this point, I am trying to (make) a much more theatrical feel to this work—less pure movement—and give it more of a character base. More of a dance theater base, if you want to look at it that way,” he explains. “And so we're exploring what those characters are, and how we can not only create a character, but (also) make them move, express something without words, (and explore) how those characters relate to each other.”

Cerrudo clarifies that he has never made a storytelling ballet, and he does not intend to do so now. He says he’s pretty sure he wants the work to be abstract, but with moments where the audience will detect brief stories.

While most details about the work are still taking shape at this stage of the game, Cerrudo does know he will be working with a brilliant team. Costumes will be designed by Jeff Award-winning designer Branimira Ivanova, who has been designing costumes for HSDC since 2002. Michel Korsch will design the lighting for the new piece. He has worked with Cerrudo on such unforgettable productions as “One Thousand Pieces” (2012) and “Little mortal jump” (2012).

And, of course, Cerrudo has Hubbard Street’s versatile dancers, who are athletic, lovely, edgy, and adventurous. After five years of choreographing for HSDC, Cerrudo has had the opportunity to work with many of the same performers for quite a while, which he describes as a huge advantage.

“(HSDC dancers) are very, very open-minded. You can throw (anything) at them. They won't judge you or look at you weird. They listen and try. It's really good. Sometimes as a choreographer, you have these crazy ideas (and) you might think, 'What are they going to think? Are they going to go for this?' but they don't judge.”

This is an especially good thing, particularly when one considers a work like “PACOPEPEPLUTO” (2011), another of Cerrudo’s creations that will be performed during one evening of the June Summer Series. “PACOPEPEPLUTO” is a series of solos created for three men, set to the music of Dean Martin, which first premiered on stage in December 2012. It’s a playful, quirky, and unavoidably sexy number in which nearly naked men perform on a dimly lit stage. In fact, the lighting and the staging is so well executed, that you may at first wonder if the men are, in fact, wholly nude.

How had he concocted this unforgettable series of solos? Cerrudo explains, “This piece was choreographed for the Inside/Out Choreographic Workshop, where the dancers choreograph for each other in a no-pressure environment. You feel you can, as a choreographer, explore anything, and it's a place where you can fail and do anything you want,” he says. “I wanted to explore trying to make three solos for men completely naked. So, that is how the whole idea started.”

Cerrudo’s plan was to use dim lighting such that the dancers would be able to perform nude, but tastefully so. His original vision, however, did not pan out, because no matter how they tried to arrange the lighting during tech rehearsal, the nudity ended up being a distraction. The self-effacing choreographer says that, in a way, he failed, because he wasn’t able to achieve his original goal. He agrees, however, that the piece is “so much better” the way it evolved.

Modest as always, Cerrudo adds, “I was shocked Glenn (Edgerton) would actually want it for the company. For me…it was just to try it.” Anyone who’s seen the work, however, isn’t likely to share Cerrudo’s surprise. (“PACOPEPEPLUTO” will be performed on June 6 only, a special production which will be simulcast on a 40-foot-wide LED screen in the Jay Pritzker Pavilion in Millennium Park, where the public can enjoy it for free.)

Right now, the Summer Series premiere is almost entirely in Cerrudo’s head, and it’s intriguing to consider what shape this unformulated idea will take by its June debut. Two things are certain from Cerrudo, though: 1) he will always keep you guessing, and 2) he will never disappoint. You might call that a recipe for success. 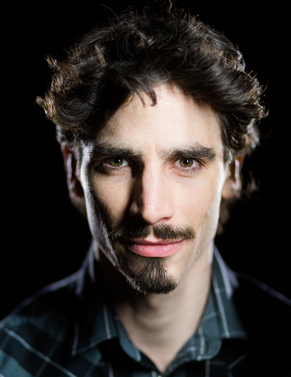