Shall We Dance?: RECOLLECTIVE

American Ballet Theatre's Harris Theater programming looks back at its past via the artistry of a diverse slate of talented dancers who point to its future this winter. 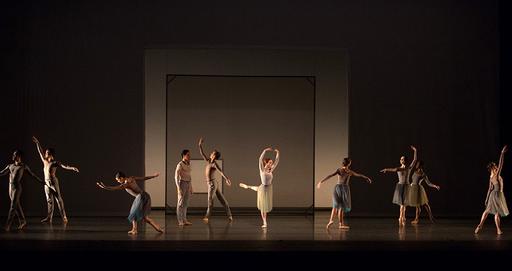 Chicago audiences will get an opportunity to absorb a healthy dose of that history when ABT performs two Harris Theater programs (and a special Harris Theater Gala performance) this February.|

In two programs comprised of works by luminary choreographers originally set on or commissioned by American Ballet Theatre, the company will explore its history through contemporary ABT dancers like David Hallberg  and the venerable Misty Copeland, dancers that mark its future.

Since its founding in 1940, ABT has been recognized as among the premiere ballet companies around the globe performing a wide ranging repertoire from the world’s elite choreographers before more than 300,000 people each year. That repertoire is indeed a stunning representation of ABT’s rich history.

And there’s a lot of history there to choose from. So when curating a program that speaks to that history, the company’s artistic director, Kevin McKinzie, worked assiduously to create a kind of equilibrium between the diversity and range of choreography and the athleticism and artistic dexterity of ABT’s stunning dancers. Said McKinzie, “In the end, it’s about finding the right balance of works that can take an audience through an emotional journey.”

For Chicago audiences two distinct programs will depict that journey in a company of dancers that McKinzie points out are now, “as individual as they can be,” noting the diversity that has emerged within the company over those 76 years.

​ABT’s first Harris Theater program (Program A) will begin with Alexei Ratmansky's Serenade after Plato’s Symposium. 2013 McArthur “Genius” Grant recipient, Ratmansky has been ABT’s resident choreographer since 2009. Set to Leonard Bernstein's 1954 concerto of the same name, his Serenede evokes the spirit of the debate and discourse of ancient Greece depicted in Plato’s celebrated text. This is Ratmansky in broad strokes, big gestures and exacting steps, set for 7 ABT male dancers, each with his own generous window for solo dance.  The New York Times called the work “the most authoritatively original creation this bewilderingly versatile choreographer has given us and richly extends the nature of dance theater.”

Also on ABT’s Program A this winter is one of choreographer Antony Tudor’s final ballets, The Leaves are Fading, a reflective work set on music from Antonin Dvořák’s little-known Cypresses for String Quartet (its wistful pas de deux, a contemplation of love, memory and the passage of time);  and Christopher Wheeldon’s stylistically chic and architecturally stunning Thirteen Diversions. Bubbling over with contrast and panache, Wheeldon’s work draws its name from Benjamin Britten’s Diversions for Piano (Left Hand) and Orchestra, playing on the music’s themes as it highlights the incredible grace and innate physicality of the ABT dancers. This is clever choreography, geometric in structure, yet moody and taut, producing a brilliant balance and a thoroughly satisfying dance experience.

​Program B offers even more intrigue with Jessica Lang’s Her Notes, the choreographer’s very first work set on ABT. A self-proclaimed "visual artist whose medium is dance," Jessica Lang incorporates striking design elements and transforms classical ballet language to conceive a complete universe of expression. Lang’s Notes takes inspiration from composer Fanny Mendelssohn’s most famous work, Das Jahr (The Year). The 13-movement suite for piano composed in the Romantic style serves as a musical diary depicting the months of the year she spent in Rome with her family. Her Notes is an experience in visual poetry. The choreography is rapt in delicacy, with elegant lines, graceful point work and a lovely—if muted—Lang-designed backdrop. These vignettes speak to both Lang’s ability to depict the visual language of music and ABT’s dancers’ ability to propel artistic fluency outside of the full-length ballet form.

Also on Program B is Jerome Robbins’ masterpiece, Other Dances, a work that pays homage to the romanticism of Frederic Chopin's piano works and the transparency and clarity of classical ballet. Originally set on Russian stars Natalia Makarova and Mikhail Baryshnikov, Other Dances was choreographed in 1976 for a benefit for the New York Public Library for the Performing Arts. Created specifically to showcase the legendary ABT dancers’ monumental technique and unrivaled artistry, the work is comprised of short, folk-inspired dances esteemed for their simplicity and virtuosity.

​Alexei Ratmansky’s newest creation, Songs of Bukovina will cap a program that spans style, complexity and time, all elements that have evolved over the years in a company as iconic as the works they bring to life.

Above all, Chicago’s winter ABT performances are about the connection of its company's past, present and future. As McKinzie put it, “The key to all these ballet’s in our presentation in Chicago is that they all resonate with the artists because they were all created on ABT artists, past and present.  So, it is like presenting a family album where one can discover one’s past and be proud to be defining its future. They are all uniquely ABT.”

​American Ballet Theatre comes to Harris Theater for Music and Dance in Millennium Park in two programs: Program A on February 22 and 24, 2018 and Program B on February 23 and 25, 2018. Visit harristheaterchicago.org for tickets or more details.

American Ballet Theatre in a scene from Jessica Lang's Her Notes (photo by Rosie O'Conner).