This August Emmy Award-winning American Masters series presented Althea, a PBS documentary on athlete Althea Gibson (1927-2003). Contrary to the popular belief that Arthur Ashe was the first African-American to win Wimbledon in 1975, Gibson crossed the color line more than a decade earlier, becoming the first African-American to play and win at Wimbledon in 1957 and 1958, and at the U.S. Nationals in 1957 and 1958. Since the latter is the precursor to the U.S. Open, it’s no coincidence the new American Masters episode premiered during the U.S. Open on Friday, September 4, 2015.

“Gibson’s athletic prowess was unmatched on the tennis court, making her a formidable competitor. Her story remains an important part not only of sports history and African-American history, but of American cultural history,” says Michael Kantor, executive producer of American Masters.

“As far as Althea was concerned, it was not about representing the race,” adds tennis professional Arvelia Myers, who was Gibson’s friend. Billie Jean King concurs, adding, “Arthur and I used our tennis as a platform, that’s not what she wanted. She just wanted to play.” Indeed, Gibson was a reluctant figure of the civil rights movement.

Born in South Carolina, she moved to New York at the age of three and grew up as a tomboy on the streets of Harlem. She was a high school dropout when she met bandleader Buddy Walker who introduced her to The Cosmopolitan Club, a private black tennis club where she met the one-armed coach Fred Johnson who helped her develop as a tennis player.

At this time, Gibson also met boxer Sugar Ray Robinson who would become her friend and mentor. Dr. Hubert Eaton of Wilmington, NC and Dr. Robert W. Johnson of Lynchburg, VA, would also take Gibson under their respective wings to teach her how to excel at the game of tennis—and life. Under their tutelage, she received etiquette lessons, trained in the segregated south, and returned to school to receive her degree.

Gibson later went on to earn a BA from Florida A&M. Yet despite her academic and athletic achievements, she never felt comfortable with the black middle class. Describing her tennis style as “aggressive, dynamic and mean,” Gibson retained a streetwise stance throughout her life which included professional highs and personal lows.

The program touches on Gibson’s marriages to William Darben (1965-’76) and tennis coach Sydney Llewellyn (1983-’88); her depressed and impoverished state during the 1990s; her death at age 76; and her  enduring legacy. 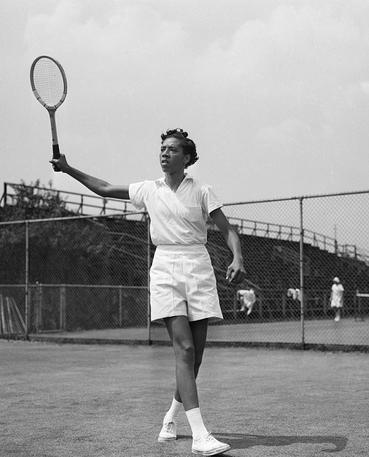