There are many ways to honor National Hispanic Heritage Month, which takes place from September 15 to October 15. One way PBS observed was the September 18 airing of the documentary Pedro E. Guerrero: A Photographer’s Journey. The American Masters project co-presented by VOCES, followed the serendipitous and influential career of a Mexican-American artist who collaborated with three American legends of the 20th century while carving out his own niche.

“We are thrilled to partner with Latino Public Broadcasting and VOCES to spotlight Pedro E. Guerrero’s talent on American Masters,” noted Michael Kantor, executive producer of the award-winning series. “I hope the documentary and our accompanying national community engagement and education effort inspires a new generation of equally courageous photographers.”

Ironically, Guerrero (September 5, 1917-September 13, 2012) discovered the art form qute by accident when he mistakenly enrolled in a photography class at Pasadena’s Art Center after attending a segregated high school in Mesa. Although Guerrero felt disenfranchised during his formative years at the “Mexican only” school in Arizona, his life took a turn for the better when, at just 22 years of age, famed architect Frank Lloyd Wright hired  him to photograph Taliesin West. From this first assignment in 1939 until the architect’s death in 1959, the two men would remain colleagues.

Similarly, his association with acclaimed sculptor Alexander Calder would last more than a decade after Guerrero documented Calder’s artistic process in a series of candid, still photographs. Guerrero also elevated portraiture with his images of sculptor Louise Nevelson. She, in turn, would influence his life as her granddaughter archivist Dixie Legler became Guerrero’s second wife. Both women share their experiences and insights on the photographer in Pedro E. Guerrero: A Photographer’s Journey.

Under the direction of Latino-American filmmakers Raymond Telles and Yvan Iturriaga, the documentary also included first-hand accounts from Guerrero’s friends, collaborators and architectural experts as well as featuring an exclusive interview with Guerrero who talks about his World War II service, post-war magazine career in New York, and vocal opposition to the Vietnam War which led to the end to his editorial career.

Guerrero continued to produce work: tackling freelance assignments, producing images of New York and shooting portraits before eventually returning to Arizona to live out the rest of his life. Today, his legacy can be seen in his art.

​“We at Latino Public Broadcasting are extremely pleased to partner with American Masters on this film,” explained LPB Executive Director Sandie Viquez Pedlow. “Pedro E. Guerrero is an important American artist whose work, until now, has been known to only a relatively small group of photography and architecture aficionados. Being showcased on American Masters provides a high visibility platform to share his remarkable story and brilliant photographs with the American public; we hope the broadcast will finally give him the national recognition that has been long overdue.”

​if you missed the airing, you can stream the documentary online at http://www.pbs.org/wnet/americanmasters. It’s a great way to help celebrate National Hispanic Heritage Month and learn more about Guerrero’s work. 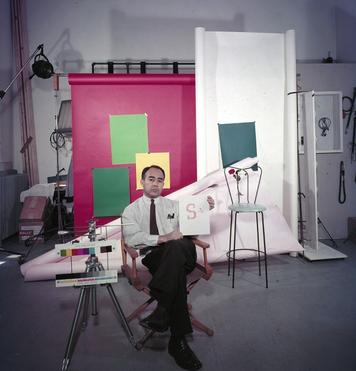