The new American Writers Museum (AWM) has leased one of Chicago’s busiest blocks, a prime space at 180 North Michigan Avenue, for its early 2017 opening. The location’s proximity to hotels, residential buildings, universities, cultural attractions, Millennium Park and public transportation is expected to provide a vibrant home for the first and only museum to engage the public in celebrating American writers and their influence on our history, our identity, our culture and our daily lives.

Showcasing the personal stories and literary works of diverse American writers, from Mark Twain to Dr. Seuss, the interactive, high-tech museum is expected to draw up to 120,000 visitors annually. The museum’s esteemed curating team and National Advisory Council are working closely with internationally renowned museum and exhibit companies in the museum’s development. AWM is also collaborating with 50 authors’ homes and museums around the U.S. – now AWM Affiliates – that will support its mission with author-specific knowledge and expertise and foster an exchange of ideas and experiences.

The museum is expected to be a strong addition to the city’s diverse landscape of museums and cultural institutions. Says Chicago Mayor Rahm Emanuel. “I enthusiastically support the efforts to place a national writers museum in Chicago. Such a museum will complement the rich offerings of the city’s theaters, museums, libraries, and musical activities and adds significantly to Chicago’s vitality.”

The museum’s themed galleries, interactive exhibits, educational programs and special events will change regularly to continually surprise and engage visitors of all ages. They will come face-to-face with great writers using their zip codes in Writers Hall; accompany roving writers such as Kerouac and Steinbeck on their literary travels;  and “visit” writers’ homes and fictional sites, such as “Tara,” “Cannery Row,” and “The House of the Seven Gables” in Nation of Writers. Exhibits such as The Mind of a Writer, A Writer’s Room, and Word Play will de-mystify famed writers’ lives and methodologies and invite visitor creativity with games and other immersive offerings. Readers Hall will host films, talks, readings, and presentations to school and other groups.

“We are thrilled to have found the perfect space in the heart of downtown Chicago, just steps from the city’s major attractions,” says AWM founder and president, Malcolm E. O’Hagan. “The American Writers Museum will become a beloved attraction for Chicago residents and visitors from all over the world, and will provide an exciting and unprecedented opportunity to showcase true Americana in one of the nation’s most culturally rich cities.”

The American Writers Museum is the culmination of O’Hagan’s vision, and has garnered the enthusiastic support of scholars, publishers, writers, universities, and booksellers, among a passionate group of others. 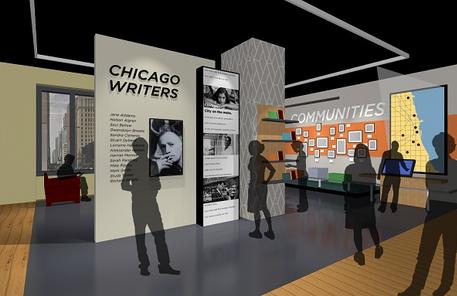