The legendary Apollo Chorus will continue its milestone season with Choral Classics - Bach’s Mass in B minor. Celebrating the power of live musical performance in collaboration with the Renovo String Orchestra, The Apollo Chorus will perform Bach’s incomparable masterpiece on Saturday, February 25, 2017 at 7:30 p.m. at the Wentz Concert Hall, 171 E Chicago Avenue, Naperville.

​Bach’s Mass in B minor is arguable his most profound and inspiring works. The legendary composer spent the last years of his life undertaking what he knew would be his final great achievement.  The upcoming special performance will feature returning Apollo artists Scherazade Panthaki (soprano) and Richard Ollarsaba (bass-baritone), in addition to Kate Tombaugh (mezzo-soprano) and Charles Blandy (tenor), making their Apollo debuts.

The Apollo Chorus, founded in the aftermath of the Great Chicago Fire, is one of the most recognizable volunteer choral organizations in the United States. Its approximately 130 auditioned members include men and women of all ages and diverse demographics and backgrounds brought together by a common love of music. The chorus has performed the master works of the choral repertoire, as well as new venerable works from contemporary composers. The Apollo Chorus has also performed at notable historic events, such as the 1893 World’s Columbian Exposition, the Century of Progress International Exposition, the opening of Medinah Temple, the opening of Orchestra Hall (Apollo was considered the official chorus of the Chicago Symphony Orchestra prior to the formation of the Symphony Chorus), the opening of Navy Pier, and the “Oprah Surprise Spectacular.”

​Tickets to the February 25th performance are $20-$40 when purchased in advance at www.brownpapertickets.com. For more information visit www.apollochorus.org. 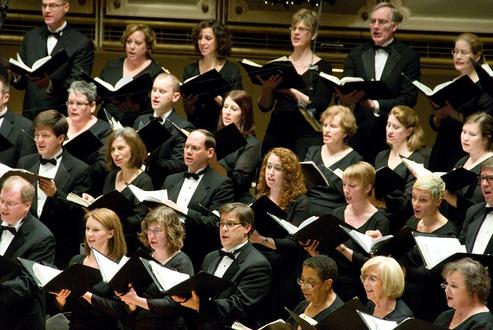