Back when April Verch was a young prodigy in Rankin, Ontario, she probably never really knew how her wildly diverse talents would coalesce to form her uncommonly distinctive career. Fresh from Boston’s Berklee College of Music, the Canadian fiddler moved rather precisely into prestigious performance circles where singing, song-writing and step-dancing began to work their ways quite organically onto the stage, alongside sterling playing of the traditional Ottawa Valley style fiddle tunes that had fed her youth. Now, two decades into a distinctly inimitable career, Verch is a singular artist who is as well versed in U.S. and Appalachian folk music as she is her native repertoire.

And with her latest album, Bright Like Gold, she’s added collaborations with Bluegrass luminaries as well. Verch has done it all. And this winter, she’ll bring her collective artistic knowledge (and her acclaimed April Verch Band) to The Old Town School of Folk Music for a concert that is not likely to resemble anything you’ve seen before. Verch takes a particularly humble approach to her art (given the size of her talent) but what really struck me from my recent conversation with her was her fierce dedication to authenticity, performing what speaks distinctly to her. Like our conversation, her performances are the real deal, a genuine reflection of who April Verch really is.

Q: Of course, your performance range is clearly broad one, but you've carved out quite an incredible niche for yourself performing Ottawa style folk music. Did you know back at Berkley College of Music that you wanted to focus your career on such a niche genre?

A: You’re absolutely right...my performances and repertoire cross genres and boundaries, and that’s probably because I play what I love, and I am passionate about a lot of different fiddle styles.  When I was studying at Berklee College of Music in Boston, I knew that I wanted to make a career of performing and touring.  I was still exploring styles and deciding exactly how I was going to accomplish that…  Having said that, I always knew that the Ottawa Valley style that I grew up with would be a big part of my sound.  It’s part of my roots, and I love it.  So no matter what I play or explore, I let it go through that “Ottawa Valley filter,” and in that way, I’m being true to myself and creating my own sound at the same time.  It’s a niche, yes, but it’s what I love and it helps to differentiate me in a lot of ways as well.

Q: Well, your multi-demensional performances are also very niche, themselves. You sing, you play and you step. And music students are typically encouraged to think as broadly as possible when launching their careers. How did you begin on such a unique path?

A: Fiddling and step-dancing have been a part of my life as long as I can remember.  I started dancing at age 3 and fiddling at age 6.  My parents were fans of those traditions back home, and my Dad played music as a hobby, and so I was around it a lot.  I guess that’s how I got started on the path that I took; really I was on that path before I even realized it…And I was so passionate about it that I continued on that path and found ways that I could share it with the world. It wasn’t necessarily a very calculated decision, it just felt right; it felt like what I was meant to do.

Q: After nearly two decades in the industry, you've learned a lot about taking the narrow path. What would April Verch now have told April Verch then before launching her career?

A: I think part of the process of learning as you go is what makes this such a rich experience. I’ve made some mistakes, but nothing I regret.  Everything has lead me to this moment. Getting worried and nervous at certain points in my career did, and still does, lead me to some better results down the road. So I’m glad I didn’t know before what I know now.  I figured things out a little at a time, like how you don’t have to try to please absolutely everyone (because you never will), and getting to that point was really important and made me try a lot of things I might never have tried. So, I guess April Verch “now” would have told April Verch “then” something like this: “It’s going to be a rocky road.  There are going to be a lot of ups and downs. But follow your gut, be yourself, respect everyone and everything along the way, and realize that in the end, everything will work out for the best. Be patient with yourself and enjoy the journey.”

Q: What was it like recording your latest album, Bright Like Gold, with Bluegrass Hall of Famer Mac Wiseman?

A: Mac is such a gem. It was a real honor to work with him and have him sing on our recording. I learned so much from him, especially from sitting around talking and listening to him tell stories of the “old days” and his experiences in the business. He’s not only a wonderful and legendary musician; he’s also a very savvy business person and is more than willing to share his knowledge and give advice.  He’s also extremely genuine and sincere.  I look up to him in many ways and am ever thankful we got to know him through that recording experience. I visit him every chance I get to pass through Nashville and those visits are treasures.

Q: Tell me about performing in the Opening Ceremonies at the 2010 Olympic Winter Games. What was that like for you?

A: Performing in the Opening Ceremonies...in Vancouver was the thrill of a lifetime. The audience in the stadium and the perceived viewing audience in your mind is an adrenaline rush for sure. But in addition to the huge production and excitement, it was also a very emotional experience for me. I felt so proud to be representing our Canadian fiddle tradition to the world on behalf of fiddlers today and those that paved the way and have passed on, but there is such a strong, vibrant fiddle community. And to be able to represent that was a true honor.  It felt like a huge responsibility, but it was also a lot of fun.

Q: So what can we expect from your January 2015 Old Town School of Folk Music performance?

A: Our shows feature a mix of instrumental, vocal and Ottawa Valley step dancing selections. We incorporate a few different roots/traditional music styles into our repertoire, including Canadian Old-time (which I grew up with), Appalachian, Bluegrass and Western Swing, which keeps things fresh for us and the audience. Some of the tunes and songs are traditional, some are original and a few are covers.  We love to get to know people and we talk about where or who we learned tunes from or what inspired us to write them. I feel so fortunate to travel with the band members I have. They are two of the best musicians that I’ve worked with, and we really click both on stage and off. Cody Walters plays bass and claw hammer banjo in the band…Our guitarist, Hayes Griffin...also plays mandolin.  It’s neat to have the guys switching instruments and taking the lead on their own songs.    I usually dance three or four times each set and it’s a style of dancing that most people aren’t familiar with, so I love sharing that with them. We love mixing moods and using different band configurations…It’s a really good time. We love performing and entertaining, and it’s my hope that we can take people out of their everyday thoughts or worries for a while and on a little journey to somewhere they need to go.

You can experience that journey on January 18  when April Verch  swings into Chicago's Old Town School of Folk Music and gives audiences a taste of the most authentic, heartfelt folk performance we'll see in the Windy City this season. 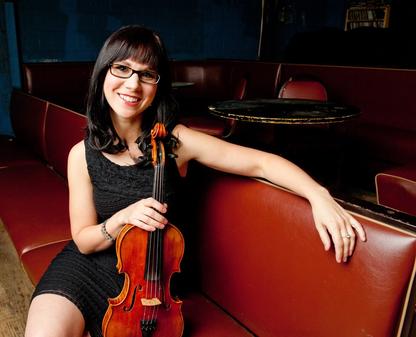