It seems obvious that art as an expression is as changeable as the surroundings that encompass the artist. One can scarcely imagine the subjects, styles and themes within an artist’s "toolbelt" remaining static when that artist’s world drastically changes. And any artist’s output is likely to take on the face of their deepest concerns, their psyche and most powerful inspirations. Such was the case when the United States stock market crashed in 1929 launching the country into The Great Depression and its citizens into the darkest economic times of the century.

The decade from the Crash of 1929 until the United States’ entry into World War II was perhaps the most diverse and dynamic artistic period for American artists in the entirety of the twentieth century. Painters explored aesthetics that spoke to European abstraction, realism, populism, labor, urban and rural themes, the new and the traditional. This summer, The Art Institute of Chicago unveils a new show that examines just how those artists sought to rethink modernism and forge a new national art and identity, in an exhibition titled America After the Fall: Painting in the 1930s. On view from June 5 to September 18, 2016 in the Abbott Galleries of the Art Institute of Chicago’s Modern Wing, the show will then travel to the Musee de l’Orangerie in Paris and the Royal Academy in London.

Featuring 50 masterpieces of American painting—including seminal works by Edward Hopper, Grant Wood, Thomas Hart Benton, Georgia O’Keeffe and a host more—the exhibition tells the tale of the turbulent economic, political and aesthetic milieu of the 1930s and how artists in the United States began to grapple with the identity of American Art as a result.

Documenting not only the artistic landscape of the post-crash depression era, but also the real sense of a nation’s fall from grace, the new exhibition traces the shifting styles of American Masters at the height of their powers forging new paths to create a new identity for what was known as American art.

​The new exhibition presents wildly disparate artistic styles and subjects reflecting a nation of artists torn by fear and anxiety, grief and hope and revealing a struggling national psyche that was quickly emerging from the ashes of the 1929 crash and the growing wave of fascism overseas.

Edward Hopper’s Gas (1940), for example, offers the stark realism of a country filling station out on a lonely road with a single attendant subordinated to the deep emptiness of the dark trees of the wilderness behind disappearing into the night. The theme is near to Hopper’s emerging Depression era style, melancholic homegrown subjects that enlist quiet, contemplative emotions framed in contrast by bright, vigorous hues.

Missouri native Thomas Hart Benton and his fellow Regionalists, on the other hand, sought to etch out a national art identity that glorified America. His 1939 lithograph, Cradling Wheat, shows an iconic and romanticized view of American sharecroppers, pulling their weight and harvesting the land, building a prosperous future from a rich and burgeoning countryside.

​Painters like Philip Evergood and Ben Shahn employed the tool of social realism to protest political attitudes of the time, shining a light on the difficulties of marginalized members of society. Likewise, issues of race and social justice also bubbled to the surface.

Each with his own burgeoning direction, artists and writers of the period sought to project a new sense of the American perspective emerging from a disintegrated economic past. As Judith Barter, Art Institute Field-McCormick Chair and curator of American Art, points out, the stark disruption in American prosperity spurred a distinct desire for a new identity that would emerge from the ashes of the turbulent period. “The 1930s began the process of defining the American scene,” Barter explained. “(America After the Fall) describes the search for ‘Americanness’ that dominated the work of artists, novelists and critics through the decade, revealing their preoccupation with national identity…” a preoccupation that emerged as a response to the turmoil and fears brought on the Great Depression.

​The phenomenon of artists searching for a new identity in the wake of troubling times is certainly nothing new, of course. The Art Institute’s February 2015 exhibition, Shatter, Rupture, Break, brought together works spanning two galleries that depicted artists’ response to the rapid change experienced during the outset of World War I, showing works that expressed the jarring fears elicited by changing times produced in a nation suddenly at war.

Following its installation at the Art Institute, After the Fall: Paintings in the 1930s will make its way the Musée de l’Orangerie in Paris and London’s Royal Academy. The exhibition will offer the first time many of these iconic American works—including Grant Wood’s American Gothic—can be seen outside of North America. For French and British audiences, this exhibition will create an unprecedented opportunity to experience these works firsthand.

​Accompanying the exhibition will be a catalog, published in partnership with Yale University Press, with a lead essay by Barter that will further explore these themes. Also included will be 140 colored illustrations and additional contributions from: Annelise K. Madsen, assistant curator of American Art; Sarah Kelly Oehler, Gilda and Henry Buchbinder associate curator of American Art, among others.

The insight gleaned from the diverse works on view in this new exhibit supports the compelling notion that art in truth reveals the inner psyche, and for these artists, wrestling with their own identities in an unsettling time, art created a powerful outlet to process their own fears as well as those of a national audience also struggling to make some sense of the changing world around them.

​America After the Fall: Paintings in the 1930s is on view June 5 through September 18, 2016 at The Art Institute of Chicago. 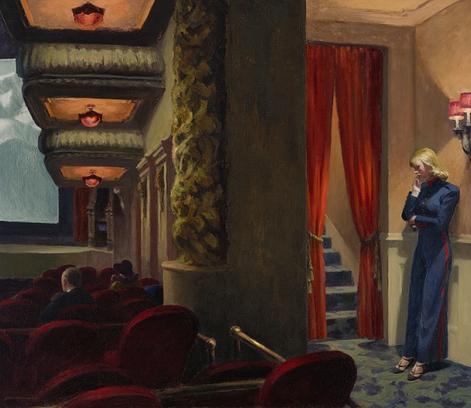 New Art Institute exhibition explores the dizzying scramble to redefine American art amidst the fears and turmoil of the stock market crash of 1929 and the decade that ensued.