Acclaimed artist Theaster Gates and his Rebuild Foundation recently announced the launch of Dorchester Industries, a workforce training and apprenticeships initiative for un- or under-employed people across the South Side of Chicago. The program pairs people with Rebuild Foundation’s artists-in-residence as well as local tradespeople—from masons and general contractors to landscapers—to learn new skills as well as have direct, hands-on opportunities to create and sell new art and design objects. To kick-off the initiative, handcrafted wooden tables and ceramic dishware, created by the first generation of program participants, will be used and available for sale at the November 5th benefit and auction for the Stony Island Arts Bank (SIAB), the programmatic center of Rebuild Foundation. Additionally, a series of beautifully crafted and boxed Japanese-style ceramics, created by Dorchester Industries under the guidance of Koichi Ohara, a well-known contemporary Japanese ceramicist, will be included in the event auction.

A team of 8 Dorchester Industries participants have been working with Ohara, learning the art form over the last month, from the basics of working with clay to the processes involved in kiln firing and glazing. During his time in Chicago, Koichi and the team of apprentices have produced some 2,000 works, from soup bowls to tea bowls, and sake pitchers and cups. For the SIAB benefit auction,15 of these have been packed into hand-crafted wood boxes in mixed sets of five and will be available for bidding. The auction will also include works by Gates, Anselm Kiefer, Eddie Peake, and Antony Gormley, drawn from Gormley’s personal collection. Proceeds from Dorchester Industries objects will be provided to program participants, while sales of other auction artworks will support Rebuild Foundation’s exhibitions and community programs. Auction artwork is available for bidding on Paddle8 at paddle8.com/auction/rebuild-foundation.

​Also this week, Rebuild Foundation announced that the November 5th benefit and auction will feature a preview of Glenn Ligon’s A Small Band (2015) installation at SIAB. The work, which is comprised of the three words, blues, bruise, and blood, written in lowercase in Ligon’s signature neons, is inspired by the testimony of Daniel Hamm. Hamm was part of the “Harlem Six,” a group of young black men wrongly accused and convicted of murder in the mid-1960s. Following his release from prison, Hamm spoke out against the police brutality he experienced while in custody, testifying “I had to, like, open the bruise up and let some of the blues…bruise blood come out to show them.”

The installation will boldly illuminate the interior of the Arts Bank—its power amplified by its physical confinement within the lobby of the building. Particularly poignant in a year rife with incidents of police violence against young African-American men, the installation offers an opportunity to engage in dialogue on identity and race, through history and into today. The installation continues the exhibitions and programming at SIAB that explore representations of the black body in art and supports Rebuild Foundation’s mission to spur community change through artistic and cultural engagement and discussion. A Small Band will open to the public on November 7, remaining on view through January 2017, and admission is free.

​“Glenn and I have known each other for 10 years, and I have always been moved by the combination of sensitivity and power manifested in his work,” said Theaster Gates, acclaimed artist and founder of Rebuild Foundation. “To me, his art is as much about his use of language, a kind of poetry, as it is about the specific media he uses to convey that poetry, and A Small Band is a perfect example of that approach. While neon is so typically associated with the coarseness of advertising, here Glenn has co-opted that, forcing us to consider powerful words drawn from a travesty of justice. I am tremendously grateful to Glenn for helping us bring this work to Chicago’s South Side communities, for whom these experiences often have such personal resonance. This work sets the bar for the kind of exhibition we will be doing at the Stony Island Arts Bank going forward.”

For more information about Dorchester Industries or the Rebuild Foundation, visit rebuild-foundation.org. 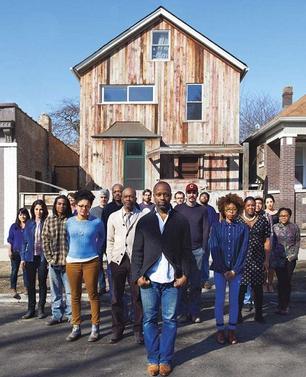 Acclaimed artist Theaster Gates and his Rebuild Foundation will launch an extensive community training program that will grow and promote skills of tradespeople in Chicago's Southside communities this fall.