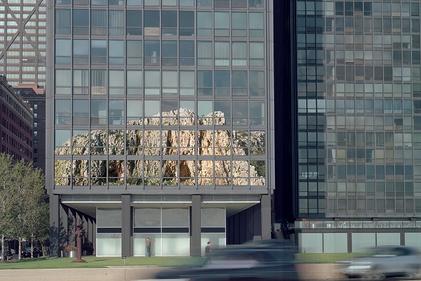 Celebrated Chicago artist and photographer Assaf Evron, along with the Esplanade Apartments located at 900 and 910 N Lake Shore Drive, recently announced Collages for the Esplanade Apartments, a three-story temporary installation presented with the Elmhurst Art Museum. Presented in conjunction with EXPO Chicago and the Chicago Architecture Biennial, the installation on the building’s eastern facade will be on display from September 17 to October 1.

​The residential complex, located at 900 and 910 N Lake Shore Drive, were the first high-rise buildings designed by iconic German architect Ludwig Mies Van der Rohe to fully implement a continuous exterior curtain wall separate from the structural frame, and features his signature modernist style. Drawing on Mies’ focus on the connection between art and architecture, Israel-born Evron’s collages are a distinct homage to the architect’s own collage works. Mies’ collages on paper featured domestic interiors with American landscapes seen through their glass windows and were used as a graphic device in architectural studies and proposals to clients in the United States.

The site-specific installation is a continuation of Evron’s ongoing collage series, first showcased at the Elmhurst Art Museum’s McCormick House – another Mies van der Rohe structure. In a similar fashion, The Collages for the Esplanade Apartments treats the building’s windows with an Israeli mountain range. This insertion of rock formations from Evron’s homeland – a location where pre-human cave dwellings have been discovered—creates a dialogue about the origins or architecture, natural resources and global citizenship.

“Mies van der Rohe’s buildings explore the relationship between nature, art and architecture, merging them into one aesthetic,” said Evron. “Using Mies’ logic and applying it onto his building, the caves – a natural residential high-rise – create a juxtaposition between the natural and modern architecture.”

​Thrilled by Evron’s vision, eight apartment owners volunteered their windows to make the installation possible. According to Trinita Logue, the Esplanade Apartments’ condo association board chair, Evron’s installation is the perfect fit for the building.

“As residents of one of Mies van der Rohe’s most recognizable architectural designs, we’re very proud to be a part of this breathtaking installation,” says Logue. “As an artist and Mies van der Rohe fan himself, Assaf Evron is the perfect fit to bring to life Mies’ own collage strategy on the building’s façade more than sixty years after its completion.”

The Collages for the Esplanade Apartments will remain on display on the building’s eastern façade from September 17 to October 1, 2019. Presented with the Elmhurst Art Museum in conjunction with the Chicago Architecture Biennial, the installation is made possible by participating residents and by funding from ARTIS, corporate sponsors and individual gifts. The installation is featured as part of EXPO Chicago’s IN/SITU Outside program, which provides the opportunity for exhibitors to present temporary public art installations situated along the Lakefront and throughout Chicago neighborhoods, presented in partnership with the Chicago Park District (CPD), the city of Chicago's Department of Cultural Affairs and Special Events (DCASE) and Navy Pier.

For more information on Assaf Evron and his body of work, visit www.assafevron.com.