“We are thrilled to present five great dance companies as part of Chicago Rhythm Fest for the second year as part of our ‘Made in Chicago’ Dance Series,” says Henry Fogel, the Auditorium Theatre’s Interim Chief Executive Officer. “The impact each of these companies has made, not just to the dance community, but to all of Chicago, is truly remarkable.”

Chicago Rhythm Fest is the grand finale presentation of the  Stomping Grounds festival and features works from five of the participating companies, a showcase of percussive dance from around the world.

​Chicago Human Rhythm Project’s resident company, BAM! will showcase Anthology of Rhythm, which takes audiences on a percussive journey through 50 years of the American jazz arc. The anthology begins with two pieces from the golden age of big band swing, with Harold Cromer’s 1944 showstopper, Opus One, followed by Cole and Atkins’ 1937 signature work, Soft Shoe.  Anthology of Rhythm culminates with a world premiere by Chicago Human Rhythm Project’s co-fonder and artistic director, Lane Alexander, danced to the music of one of Thelonious Monk’s most famous compositions, In Walked Bud.

​A company committed to the presentation, preservation and promotion of the dance and musical traditions of Spain, Ensemble Español Spanish Dance Theater will present  Algazara, choreographed by José Barrios. The piece features dancers and musicians in a festive work that begins with the dramatic sounds of the cajon, a Peruvian percussive instrument, and incorporates the fast-paced Buleria Flamenco style with a 12-count rhythm.

Mexican Folkloric Dance Company, Chicago’s oldest Mexican dance institution, delves into Mexican history and culture through the art of music and dance, creating an experience that is both entertaining and educational. Audiences can expect colorful, lavish costumes, ringing music, and festive dancing, which have characterized the company's performances for more than three decades. The company’s festival program will be made public at a later date.

​Muntu Dance Theatre of Chicago performs authentic and progressive interpretations of contemporary and ancient African and African-American dance, music, and folklore. The company’s artistic director, Amaniyea Payne will present her piece, Amathini (Can Dance), a salute and tribute to the freedom fighters of today and yesterday, who have risked their lives and shed blood for a new world order of peace. Amathini is an amazing dance of power and movement, featuring young women conveying rhythms by clanging tin cans together over their heads and under their knees, moving so quickly, the cans at times appear invisible.

​​And thought Trinity Irish Dance Company will publish its festival program at a later date, audiences can expect hard-driving percussive power, lightning-fast agility and aerial grace from a dazzling company considered one of the founders of progressive Irish dance. Founded by Emmy Award-winning choreographer Mark Howard, Trinity Irish Dance Company is known for the awe-inspiring precision of its dancers, precursor to the international phenomenon Riverdance, which today is a global sensation.

Tickets for Chicago Rhythm Fest start at $28, and are available online at AuditoriumTheatre.org, by phone at 312.341.2300, or in-person at the Auditorium Theatre Box Office (50 E. Congress Parkway). 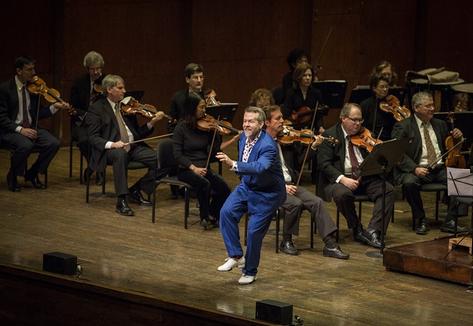 Chicago Human Rhythm Project (CHRP) founder Lane Alexander, whose latest work set to the Thelonious Monk's In Walked Bud will receive its world premiere in Anthology of Rhythm, presented by CHRP's BAM! in this year's Chicago Rhythm Fest, part of the Auditorium Theatre's Made in Chicago Series (photo by Noah Stern Weber).