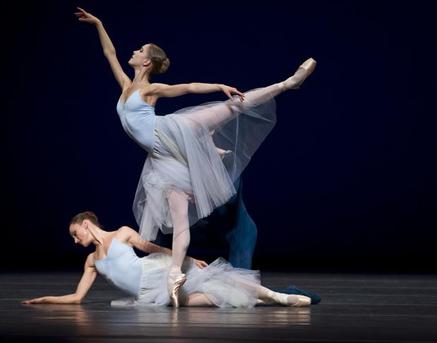 In 1941, the Auditorium Theatre closed its doors to the public in the wake of the Great Depression. Aside from when it was in use as a servicemen’s center during World War II, the theater sat unused and in disrepair, until a 7-year-long fundraising campaign – led by Beatrice Spachner and the Auditorium Theatre Council – covered the costs of theater renovation, culminating with a grand re-opening on October 31, 1967. That historic evening, the Auditorium Theatre hosted New York City Ballet for A Midsummer Night's Dream, starring principal dancers Edward Villella and Suzanne Farrell, who will serve as Honorary Co-Chairs of the 50th anniversary celebration.

While the Auditorium Theatre has a long history of presenting dance, starting with its original opening in 1889, the re-opening began an unprecedented new chapter that continues to this day. The theater has since hosted legendary companies including the Bolshoi Ballet, The Royal Ballet, and Martha Graham Dance Company, as well as many of the companies represented at A Golden Celebration of Dance.

“The Auditorium Theatre’s grand re-opening 50 years ago helped usher in one of the most exciting eras of dance in Chicago,” says Tania Castroverde Moskalenko, Auditorium Theatre CEO. “I am thrilled to commemorate this momentous occasion with such a special evening that will bring so much talent from around the world to our historic stage. As the Theatre for the People, this is an amazing opportunity for our patrons to experience an incredible array of top-tier performances over the course of one unforgettable night.”

In addition to the special dance performances for the Golden Celebration, patrons will be able to experience the next generation of dance with performances by winners of major international dance competitions, including the Youth America Grand Prix.

​Many of the companies whose dancers will present pieces during A Golden Celebration of Dance have a rich history with the Auditorium Theatre: American Ballet Theatre first performed at the Auditorium in 1969 and returned for many engagements, their most recent in the fall of 2014; Alvin Ailey American Dance Theater began its Chicago residency with the Auditorium in 1969 and has been performing at the theater for over 48 years; and The Joffrey Ballet began performing at the theater in 1968 before becoming the theater’s resident company in 1995. New York City Ballet, who performed at the theater’s re-opening, first appeared onstage there in 1941. Hubbard Street Dance Chicago performed at the theatre multiple times throughout the 1980s and 1990s, and returns for its first full-evening engagement in 20 years in March 2018.

​The Auditorium Theatre 2017-18 Season is made possible in part with support from the MacArthur Foundation and the Palmer House Hilton. For more information about programming, volunteer and donor opportunities or theater tours, call 312.341.2310 or visit AuditoriumTheatre.org.