At the end of the day, the most genuine, authentic artist is simply an open book. You may not know much about them personally; you may not know their likes, their dislikes or their favorite foods, but none-the-less you know them. And that’s because for the most genuine, authentic artists, we know them by their art. They use their art as a tool for release, for expression. And the honesty it takes to be that genuine is what garners our appreciation as much as anything else we admire about their work.

“Genuine” and “authentic” are terms that readily come to mind when describing the Bacon Brothers Band. A charismatic mix of folksy rock and soulful, heartfelt sincerity, singers/songwriters Michael and Kevin Bacon (and yes, that Kevin Bacon) have built an impressive 20-year career on the concert stage as one of the most authentic American bands you’ll hear.

Their signature sound is anything but signature. While mildly ensconced in rock, their music is a versatile blend with influences from acoustic folk to Country to Rhythm and Blues, with even a few bars of classical chamber music thrown in for good measure (Michael’s versatility as an instrumentalist—as well as composer—often on display). What’s interesting is how organically these styles blend to form that signature Bacon Brothers sound. And the versatility it provides lends itself nicely to that open book their music is.

From the warm acoustics of the contemplative “Sooner or Later” to the crisp edge of the rock ballad, “Wonderful Day” (36 Cents), the diverse musical language so evident in the Bacon Brothers’ music flood a listener like a heavy tide washing over a rough sandy shore: seamlessly, fluid and unforced. So inherent in their writing, it seems the many sounds that influence the Bacon Brothers’ music must have made their marks early on.

Growing up in Philadelphia, the brothers certainly had access to a world of music. Kevin has noted musical influences from Springstein to James Taylor to Stevie Wonder and Earth Wind and Fire.

Michael launched his music career early on back in Philly with a junk band that included one of the brothers’ sisters. He then went on to college and joined a cover band that he admits engaged his interests quite a bit more than the curriculum, but then he got an opportunity to sing lead (and play guitar) for a rock band that found a bit of early success, eventually signing with Columbia Records. After a couple of years, that band fell apart and Michael made his way, as so many artists do, to Nashville, where he would cut his teeth gigging, growing as a musician and as a songwriter.

Kevin got his start in one of the early bands Michael had established back in Philly. He’d played percussion (congo and drums) in an acoustic set with bass, female vocal and Michael on guitar. It was apparently enough to get the younger brother’s musical juices flowing as he went on to play in a number of other local bands around town. But to Kevin, it was just a normal part of growing up in Philly, “It was fun,” he told me. “I liked it a lot…You know, it was a big part of kind of being a kid, in a way, at that time. It was just like, you play in a band, like a natural thing. It seemed like everybody was doing that.”

Not everybody, however, would go on to emerge as an award-winning Hollywood actor. Kevin’s first early film success, Footloose (1984), was just the start of a string of Hollywood megahits he’d star in from the likes of JFK (1991) to A Few Good Men (1992). He currently stars on the hit Fox television series The Following.

Yet for all his acting success, the seeds planted back with Michael in Philadelphia coffee houses and clubs would still hold root deep enough for the brothers to come together in 1994 to start the Bacon Brothers Band.

After hearing a demo of the brothers’ music in the early ‘90s, a friend proposed booking a Bacon Brothers show, even coming up with the name, which the brothers hadn’t yet even considered. So Michael and Kevin put together a quartet for the one appearance. That show led to another, which led to still another. And before they knew it, they were getting calls from coffee houses and clubs all over the circuit. But as Kevin points out, they had to earn their stripes like any other band would. “When I say that they were really tiny little coffee houses, they really were.” Kevin explained. “I mean we didn’t have someone that just swept in and said, ‘Here’s a great idea. Let’s create this band.’”

But that was fine for the brothers. As Kevin admits, “It was a good way for me to be introduced to the idea of being a front man because it went really slowly…it was we carry the gear, we set up, we plug everything in and find some place to eat.”

That early start would help the band evolve naturally. Hauling their gear in the back of Kevin’s station wagon, playing to what they hoped would be 150 sets of ears in the room, the band would grow naturally gaining experience with their audience and with each other.

As time went on, the band began to write its own music. Playing that music live led to recording it, which Kevin points out led to more new music, part of the cycle of the songwriter to “get rid of that thing you just wrote.” Twenty years later, the Bacon Brothers have etched out an eclectic sound performing songs from the heart that make up the open book on the brothers' lives and music.

The band’s makeup is as diverse as its influences. There’s Michael on vocals, guitar, and cello; Kevin on vocals, guitar and percussion; bass guitarist Paul Guzzone; keyboardist Joe Mennonna; drummer Frank Vilardi; and lead guitarist Ira Siegel. In any given set, band members add accordion and even mandolin to the mix. That’s a lot of diversity for a contemporary rock band, a lot of instrumentation. The assorted mix seems a risk for a group like the Bacon Brothers. Without a clear musical focus, the injection of textures like the accordion, mandolin and even cello might verge on kitschy for some listeners. But, truth be told, the breadth of textures they include only broaden the band’s voice, which in turn broadens the scope of expression the band is able to achieve. It’s also a real reflection of the natural versatility inherent in the band’s songwriters.

Michael has an incredibly broad songwriting range. Years working the circuit in Nashville can have that kind of effect. You encounter a wide range of music and musicians down in Music City, USA. Being an Emmy Award-winning composer for film and television only broadens that range, drawing upon a vast musical reference instilled by his very arts oriented family. But film scoring and songwriting are two very distinct camps for him, as he told me “The scoring part of what I do is (from) a completely different source that I draw on every day,” Michael explained. “It was actually a source that my parents planted into me at a very early age. So when I’m sitting looking at film or video I need to write music to, I just tap this source that goes right back to my childhood. It’s always there. It’s never let me down.”

That musical honesty is the only real aspect of Michael’s scoring work that bleeds into his songwriting for the band. For that, Michael, like Kevin, draws upon his own experiences providing the sort of, “personal, confessional-style song-writing” that has defined the band’s sound from the very beginning. Says Michael, “When we first put the band together, we weren’t writing songs to be cut by other people. We weren’t writing songs about fads or songs for movies. It had to be songs that we would put in front of people that were sort of revealing of ourselves.” That kind of openness can admittedly be a big draw for a band with a celebrity actor at the mic, but for the brothers, it’s simply a natural creative outlet, and thus the seamless authenticity you hear in their music.

The band’s evolution has really only seemed to cement the direction it began back in the early ‘90s. They’ve taken a seasoned approach to acoustic textures, two- and three-part harmonies, and brash indifference for genre limitations and turned the “quirky little band” Michael describes from 20 years ago into a “fully fleshed out rock band” with well thought-out instrumentation and themes that are personal and easy to connect with.

The band is currently touring the US with stops in Nashville, Las Vegas and New York City. And as usual, they’re hitting venues as diverse as the band’s makeup, from concert halls to beach pubs.

City Winery, where they’ll play here in July, has booked the Bacon Brothers in their venues in New York and San Francisco, and that suits the brothers just fine, as Kevin told me, because along with that confessional style of music they do so well, there’s a song list of fun tunes fans can rock out to. “City Winery is a place where people come because there’s somebody that they want to listen to. It’s not like you're coming to pick somebody up or (you) hope you get to pick somebody up. But it’s a listening room, you know, and a nice combination of a listening room and a place where you can feel okay about rocking out a little bit.”

The July 6 concert will include a meet and greet amid the ambiance for which City Winery has come to be known. It will include songs from the Bacon Brothers latest album, 36 Cents. Audiences will hear that eclectic sound mix from acoustic to electric harmonies and  mellow tunes to songs that will get you on your feet. It will be a great evening to get to know the brothers and their band through their music. Because that’s what a Bacon Brothers concert is all about, that honest authentic music you love to hear and connect with right away.

As Michael explains, “When you see us, by the time the set is finished, I think you have a pretty good sense of who we are as people—the same as if we had dinner together and sat around the living room talking. I think that’s kind of the way we operate because I think that’s what we do best.”

Artist Conversational with: The Bacon Brothers

After 20 years on the concert stage,
brothers Kevin and Michael Bacon are still keeping things honest with their listeners and giving performances that read like an open book on their lives. 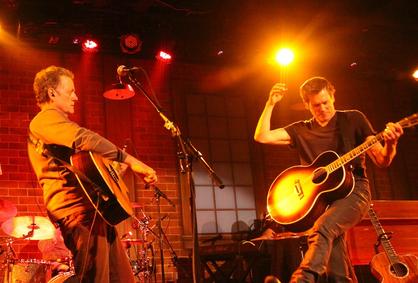