​Internationally acclaimed choreographer Merce Cunningham, known for his cutting-edge choreography and his frequent collaborations with artists of many disciplines, inspired modern dance and visual art for his entire career. Now, nine years after his death, his work still brings artists, art forms, and institutions together. The upcoming exhibition, and accompanying performance by European dance company Ballet de Lorraine, at the Museum of Contemporary Art Chicago is no different. Presented in conjunction with the same exhibit at The Walker Art Center in Minneapolis, and the 2016-2017 season of The Dance Center of Columbia College Chicago, Merce Cunningham: Common Time is a major retrospective exhibition showcasing Cunningham’s multidisciplinary projects, exploring, as Cunningham described, the “underlying principle that music and dance and art could be separate entities, independent and interdependent, sharing a common time.”

Yolanda Cesta Cursach, associate director of Performance Programs at the MCA, explains the significance of the upcoming exhibit, “(Cunningham) changed dance, and by turn was an inspirational model for contemporary art. He had an endless interest in technology and in the flattening between dance and design. I expect we’ll surprise people about the little-known facets of artists with well-known museum careers who collaborated with him—Robert Rauschenberg, Robert Morris, Jasper Johns, Bruce Nauman, Warhol and others.”

​Cunningham work has been seen on Chicago stages as recently as 2015 with the Stephen Petronio Company’s presentation of Rainforest and the Dance Center of Columbia College Chicago, and was seen every two years between 2004 and 2010 by the Merce Cunningham Company itself on the same stage. Ballet de Lorraine, of France, acting as the main movement event during the retrospective at the MCA, holds much in common with companies and performances like Stephen Petronio's, with its deep Cunningham roots. Ballet de Lorraine’s coordinator of research, Thomas Caley, danced for the company himself, and brings Cunningham’s influence when the company performs Untitled #3, choreographed in collaboration with the company’s director, Petter Jacobsson.

The shared celebration and value of Cunningham work, evidenced by The Dance Center’s continued inclusion and education of, fits nicely with Ballet de Lorraine’s Centre Chorégraphique National title. It also ushers an opportunity for Chicago’s Museum of Contemporary Art to cull audiences and students from the community it shares with The Dance Center. “The MCA and the Dance Center have collaborated on past projects, and this is a continuation of working together on joint projects that are mutually beneficial to our respective audiences (which do have an overlap),” explained Bonnie Brooks, lead curator of the Danc Presenting Series at Columbia College. “Our involvement in this initiative makes special sense since the Dance Center was the presenter of record for the Merce Cunningham Dance Company here in Chicago, and we continue to offer Cunningham technique in our curriculum.”

Led by Jacobsson and Caley, Ballet de Lorraine is making their first-ever tour to the United States during the retrospective. One of the most important companies working in Europe, and part of France’s National Choreographic Center network, they maintain a company of 26 dancers; a repertoire that includes many works by influential dance artists of our time, including Merce Cunningham; and a multidisciplinary platform for research and experimentation in order to create a space for diverse visions of dance today.

On the program for Ballet de Lorraine are two of Cunningham’s most celebrated works, Sounddance, and Fabrications. “(Cunningham) is the originator for separating dance from music, using chance operations. That will be amply shown by Ballet de Lorraine performing two of Cunningham’s signature pieces...and to drive that point, for Fabrications Emanuel Dimas de Melo Pimenta, the original composer, is performing shortwave and pre-recorded electronics,” says Cursach.

Second on the program, Cunningham’s Fabrications, features a shifting ensemble of 15 dancers. Choreographed with Cunningham's own chance procedures, the work presents a dramatic and poetic tone, accompanied by music from Brazilian composer Emanual Dimas de Melo Pimenta. For Chicagoans new to Cunningham's aesthetic, Fabrications provides a good taste of what the choreographer's work is all about. The dancers share the stage, typically in linear formations, and execute their steps against the music, with the music, however the music falls in line. The work models a good example of Cunningham’s signature “chance procedure” style, in which pieces fall into place based on chance games, like rolling dice—not necessarily based solely on the artist’s whims. Fabrications was created by combining 64 dance phrases to form a deeper interconnected whole.

The third work of the program, a Chicago debut, is Untitled Partner #3, choreographed by Jacobsson and Caley. This interdisciplinary work combines dance and film in a performance-installation, searching for, but never finding, equilibrium between id and ego. “We were keen to bring one of their own (de Lorraine’s) works to take advantage of their well-known research and experimentation. The right choices became clear fairly quickly,” says Cursach of the natural decision to curate this third work into the program.

​According to the press announcement for the initiative and performance, the exhibition and its accompanying performances spotlight collaboration with artists including John Cage (a lifelong partner with the company) and Black Mountain colleagues Jasper Johns, Robert Rauschenberg and other notable individuals, all influenced greatly in the “development of their visual styles by Cunningham’s ideas.”

Special features of the exhibition include a presentation of Andy Warhol’s Rainforest, which presents his iconic helium-filled silver balloons, and Charles Atlas’s MC9, “which will fill one of the MCA barrel vault galleries with 35 years of clips from Cunningham pieces in a dazzling audio-visual realization.” New commissions will also be on tap, choreographed by former members of the Merce Cunningham Dance Company and the Ballet de Lorraine.

​ Ballet de Lorraine: Works by Merce Cunningham and Others takes place February 18 and 19, 2017 at The Museum of Contemporary Art. 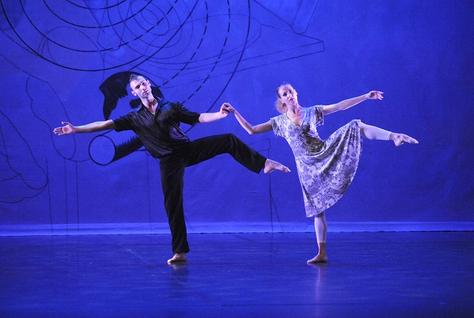