​(Center, Left to Right) Andres Enriquez, Shá Norman and other Barrel of Monkeys company members perform The Alien in Space at the 2015 Celebration of Authors (photo by Beth Bullock Photography).

Barrel of Monkeys, in collaboration with The University of Chicago Department of Theatre and Performance Studies, will spotlight student-authors in "Celebration of Authors" at 6:30 p.m. on June 7. The free event features performances of student-written stories created at each of the Barrel of Monkey partner schools and after-school program during the 2015-2016 season, and will be performed by more than 30 Barrel of Monkeys actors at the University of Chicago’s Reva and David Logan Center for the Arts (915 E. 60th St.).

During 2015-16, Barrel of Monkeys worked with 14 school partners in 48 classrooms, plus an after-school program. The Chicago-based arts education theater ensemble, now in its 19th season, conducts creative writing workshops with 3rd through 5th grade students in underserved Chicago Public Schools. The ensemble of actor-educators then turns their stories and words into professionally performed theater, presented both in-school and for the general public through its revues. Barrel of Monkeys annually performs more than 300 student-written stories for the students in their schools and 175 stories on the stage for the general public through its year-round variety show, That’s Weird Grandma, at The Neo-Futurist Theater (5153 N. Ashland Ave.). 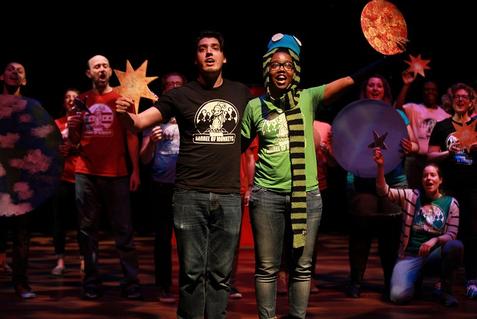