Chicago Shakespeare Theater (CST) will kick off its new World’s Stage season with Blind Summit’s The Table, a production from the United Kingdom, which launches its first United States tour Upstairs at Chicago Shakespeare for a limited two-week run. Known for reinventing puppetry for contemporary adult audiences by drawing from the traditional Japanese Bunraku style, Blind Summit Theatre showcases its radically modern style of puppetry and storytelling in The Table.  CST’s World Stage Series presents international artists and supports international touring of new work developed by Chicago Shakespeare Theatre. Through the initiative, CST has collaborated with more than 600 international artists representing 18 countries on five continents, engaging audiences in a dialogue with the world’s established and emerging theater artists.

Premiered at the 2011 Edinburgh Fringe Festival to a sold-out run, The Table was honored with a Fringe First Award for outstanding new work. London’s The Guardian pronounced Blind Summit “ the UK's puppet masters, a company whose shows have proved that puppetry doesn't have to come either with apologies or strings attached."

The Table features Moses, a self-aware puppet faced with a personal crisis as he embarks on re-enacting the last twelve hours of his life atop his table. The Table is part stand-up comedy, part Beckett and part existential dissertation on puppetry devised by Blind Summit founders Nick Barnes and Mark Down, in collaboration with Sarah Calver, Sean Garratt, Mabel Jones, Irena Strateiva and Ivan Thorley. As is traditional with the Bunraku style of puppetry, the manipulators in The Table appear openly in full view of the audience and work together to operate one beautifully crafted puppet, communicating through finely detailed movement and gesture, providing a unique experience for audiences. 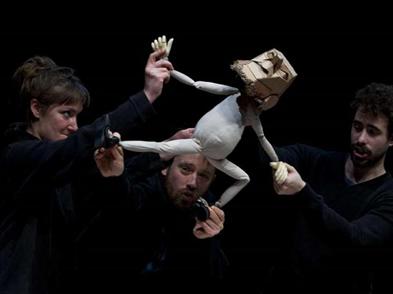