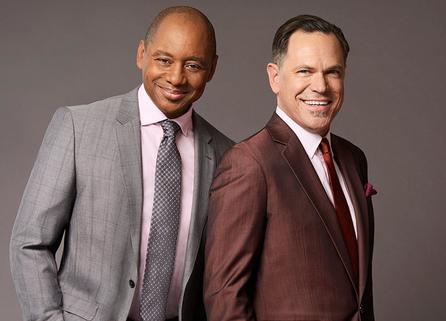 Marsalis and his quartet featuring pianist Joey Calderazzo, bassist Eric Revis and drummer Justin Faulkner, together with former Chicagoan Elling, perform songs from recently released Upward Spiral. The evening features unique arrangements of songbook staples and jazz standards such as Blue Gardenia, There’s a Boat Dats Leavin’ for New York Soon and Doxy, as well as standards-to-be from a diverse array of composers including Sting and Chris Whitley.

A native of New Orleans, Branford Marsalis is the oldest son of pianist and educator Ellis Marsalis, and was drawn to music along with siblings Wynton, Delfeayo and Jason. Marsalis has had guest turns with a legion of musical giants including Miles Davis, Dizzy Gillespie, Herbie Hancock and Sonny Rollins. On Broadway, he created original music for a revival of August Wilson’s Fences, which garnered a Drama Desk Award for Outstanding Music in a Play and a Tony nomination for Best Original Score Written for the Theater. Marsalis also provided music for The Mountaintop, starring Samuel L. Jackson and Angela Bassett, and served as musical curator for the 2014 revival of A Raisin in the Sun.

Elling is among the world’s foremost jazz vocalists and was dubbed “the standout male vocalist of our time” by The New York Times. He won the DownBeat Critics Poll for 14 consecutive years and was named “Male Singer of the Year” by the Jazz Journalists Association on eight occasions. An international jazz award winner, he won a Grammy Award for his album, Dedicated To You: Kurt Elling Sings the Music of Coltrane and Hartman, and has been Grammy-nominated a dozen times. Elling’s repertoire includes original compositions and modern interpretations of standards, all of which are springboards for inspired improvisation, scatting, spoken word and poetry. He has also written multi-disciplinary works for Steppenwolf Theatre and the City of Chicago. The Obama Administration’s first state dinner featured Elling in a command performance.