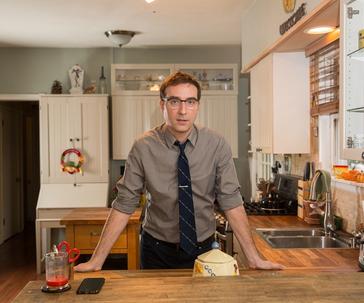 While other theaters in Chicago are busy producing traditional holiday confections, Brett Neveu and A Red Orchid Theatre are serving up a very different sort menu in the playwright’s latest work, Pilgrim's Progress. Filled with plenty of drama, lots of dark comedy, and a batch of cranberry sauce that's whipped up right on stage, Neveu's new play is a far cry from the John Bunyan essay from which it takes its name.

Pilgrim's Progress takes aim at the drama we all have going on in our families—albeit with a little bit more hilarity than the average holiday gathering.

Pilgrim's Progress takes some inspiration from classic domestic dramas like Who's Afraid of Virginia Wolfe and Eugene O’Neill’s Long Day's Journey Into Night. (Coincidentally, Michael Shannon, who plays Jim in this production, will star with Gabriel Byrne and Jessica Lang in the Broadway revival of O'Neill's masterpiece.) Nevue's goal is to bring some of the familiar verve and passion of those classics into his work while weaving his own brand of energy and excitement into the mix.

“It does have that highly theatrical feel to it,” says Neveu. “But that's the sort of the stuff that's on top of it—the agreement that families make. The trying to have fun is a little outrageous because you're trying so hard to have fun. It's like that Thanksgiving Day touch football game that gets out of hand.”

Pilgrim’s Progress isn't Nevue's first foray into writing about important days on the calendar. “Strangely, I've written a lot of plays that take place on holidays,” laughs Neveu. “Red Bud takes place on the Fourth of July. There's a new play that takes place on Halloween. This one is Thanksgiving, and then Christmas Bytes is a Christmas one. And one of the first plays of mine produced in Chicago—Drawing War—also takes place on Christmas.”

Neveu supposes using holidays as a bit of inspiration is akin to what television writers call an “event,” something the characters are working toward throughout the action of the episode. And though using a TV writing device may be comfortable for him, living the life of an LA screenwriter wasn't. So when he was offered the chance to return to teaching at Northwestern University, Neveu jumped at it.

“L.A. really didn't sit well with me,” he says. “I had always been homesick for Chicago and wanted to come back, anyway.”

And live it does. As a member of the ensemble at A Red Orchid Theatre, Neveu has found a theatrical home. One that he's returned to time and again. Though he's written plays for theaters near and far—including the Royal Court Theatre, Manhattan Theatre Club, Steppenwolf Theatre Company, and Writers' Theatre—Neveu continues to bring new work to the 80-seat space that A Red Orchid occupies.

“They are my family. They know what I do, and they know how to do it. We collaborate in a really excellent way,” explains Neveu. “Lots of yeses are said instead of lots of no's. There's not a lot of posturing. There's no ego. It just is the work. And making the work better.”

A Red Orchid has certainly found a prolific and gifted writer in Neveu. Including Pilgrim's Progress, they've produced eight of his plays, and during the time he's been an ensemble member there, Neveu has won a number of prestigious awards for his work.

While the recognition is appreciated, Neveu is just happy to be working with artists at A Red Orchid who are as passionate about theater as he is. “They are, in my opinion, the best theater artists in town.”

To be sure, the diminutive theater that A Red Orchid occupies is not to be taken at face value. Those modest confines are the perfect place for big ideas. Adds Neveu, “This tiny little room doesn't make any sense—we're all kind of crammed in there. In other respects, it makes tons of sense. We can't escape. Everybody is inches away from the audience, and so that is exciting. It's a place of pure theatrical excitement.”

Neveu supposes that working in such an intimate space is something that's given A Red Orchid Theatre's ensemble members a bit of an edge when it comes to taking their acting from the stage to the screen. Of ensemble member Michael Shannon he says, “One of the reasons Mike is such an amazing film actor is because he was in everybody's face doing shows there. He relied on the close-up so much being in that room that it just transferred right over, and he can move back and forth between worlds so easily.” Neveu continues, “Actually, all of our actors are amazing television and film actors because their training is in that room.”

Even after three years of writing and development and lots of rehearsal time in A Red Orchid's tiny theater, Neveu hasn't tired of the story of Pilgrim's Progress and is thrilled to see his work brought to life in that little space by a powerhouse cast, including ensemble member Kirsten Fitzgerald.

“It's kind of different every night,” he told me. “It has this improvisational feel to it. Every night the actors do something different. That's why I love going...I just want to see it again and again and again because they just make me laugh so hard.”

Though the show isn't exactly your typical feel-good holiday treat, audiences are having some surprisingly warm and fuzzy reactions after taking in the madcap mayhem. Explains Neveu, “Somebody (contacted) me not long ago that they had overheard this couple sitting in front of them. After the show the couple turned to each other and the guy said 'You know, we should really go home to your folks' house for Thanksgiving.'”

Neveu is, frankly, a little surprised that his story of a beyond dysfunctional family would so readily resonate with people in such a way and laughs that maybe they should reconsider those holiday plans. Even though Pilgrim's Progress's take on Thanksgiving is a far cry from the cozy Norman Rockwell-style scene, Neveu is starting to embrace audiences' varied reactions adding to the work: “There's this big message of something else at the end that makes people feel warmth.”

As for whether his work on Pilgrim's Progress will change the way Neveu plans to approach his own Thanksgiving, he says, “I think I'm going to appreciate it more. I'm going to appreciate the people I'm with more. There's a certain value to the play. In its own twisted way it's saying love the people you're with on these days and make them feel safe.”