The internationally acclaimed entertainment company Cavalia will once again push the limits of live entertainment with its new theatrical adventure, Odysseo  - a $30 million extravaganza that expands the definition of performance into an epic and soulful experience. For its first run in the Midwest, the world’s largest touring production will be presented in Chicago under the White Big Top at Soldier Field South Lot (South Lot, 1410 Museum Campus Drive, Chicago, IL 60605) starting Saturday, April 1, 2017, with matinee and evening shows scheduled through Sunday, April 23, 2017.

With a production double the size of Cavalia’s eponymous creation, which enjoyed a very successful run in Chicago in 2009, Odysseo is a show unlike any other on the planet, an immersive theatrical experience in which horses are still front and center. Imagined by Normand Latourelle - creator of Cavalia and renowned for combining different forms of artistic expression and reinventing the scenic space - Odysseo is a veritable revolution in heart-racing live performance. Audiences of all ages will be transported on an epic journey to some of nature’s greatest wonders by a breathtaking production that features 65 magnificent horses and 48 talented riders, acrobats, aerialists, dancers and musicians.

The four-legged stars play in complicity and with freedom, in a respectful relationship with their human counterparts, creating a moving artistic partnership. A liberty number, in which purebred Arabian horses are directed only by the soft murmurs of their trainer, and a fabulous caravan act that comprises people and horses too numerous to count, are amongst some of the breathtaking scenes that will leave guests of the show captivated.

​The show’s acrobats present an amazing mix of force and sensitivity, interacting with the audience, while the live musicians and vocalist perform in the most enthralling way to immerse spectators in a beautiful, multi-sensory experience. Whether it is the dexterity of the African acrobats, the enchanting sound of the Kora, or the majestic life-size merry-go-round, the cast and set of Odysseo are inspired and inspiring, delivering crowd-pleasing wonders and stunts.

Since its Montreal world premiere in 2011, the Odysseo troupe has already mesmerized more than 2 million spectators in Canada, United States and Mexico. Odysseo will conclude its second Southern California engagement in Irvine before moving its White Big Top to Vancouver in January and coming to Chicago in April.

Cavalia will bring a thrilling new show to Chicago next spring with Odysseo, an epic big top equestrian adventure that will dazzle audiences in the Windy City (photo courtesy of Cavalia). 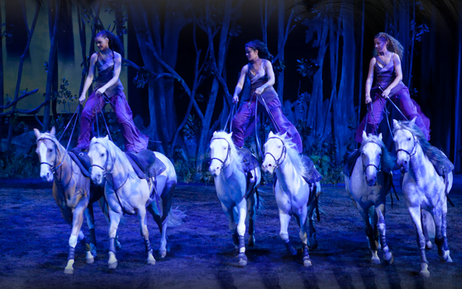