​This past summer, in a celebration of 50 years as the vanguard in Windy City design and architecture, the Chicago Architecture Foundation (CAF) opened its new exhibition, 50 Designers, 50 Ideas, 50 Wards, an eye-catching visual engagement initiative on the role design and architecture can play in resolving community issues, both local and citywide. Around the world, architects and designers are implementing ideas that address critical urban issues ranging from efficient mass transit to affordable housing to environmental stewardship to job creation. These designers’ daring ideas reflect new directions in resource management, funding and political partnership as they apply to realization of critical projects. With these things in mind, the CAF sought to create a similar vehicle to facilitate this kind of conversation and engagement right here in Chicago.

​In partnership with one of Chicago’s multi-disciplinary architecture and design firms, UrbanLab, CAF invited 50 local architects and designers to propose projects that would address the needs of specific urban communities and improve the quality of life for the residents of each of the city’s 50 very unique and diverse municipal wards. Proposal submissions were plentiful and the gamut ranged widely, but coalesced around four major themes: Activate, Reclaim, Gather, Dwell. Building upon those four themes, visitors to the exhibition will find 50 panels suspended from a circular framework, grouped by theme, displaying striking visual representations of each designer’s architectural idea, specific to one of the 50 Chicago wards. Some of the exhibition designs are already works in progress within the city, while others have the real potential to be executed within the next five years.

While paring down the proposals from the vast number submitted was not an easy process, the initiative was still not a contest in the strictest sense, but a call for a range of ideas from a wide array of professionals in the field, as Michael Wood, senior director of Program Strategy told me. “We worked with a curatorial team to assist us in identifying the architects and designers for the project. This was not a competitive process but more of an invitation for proposal…This was a process that included community leaders, well-known and seasoned architects and designers to rookie architects and designers.  We wanted to make sure to diversify the pool.”

​Wood noted also that the exhibition came to life following internal discussions within the organization on just how the project could be of service to the city and its many residents.  “Some of the things that we set out to highlight really (were) just everyday design issues that affect [sic] our neighborhood. Working with designers and looking for that next vanguard. Ultimately, we want to be able to influence city-wide discussions, conduct city wide surveys and receive more feedback on design and not just designing beautiful spaces more efficient for use.”

One particular proposal, the Available City:  Collective Space, by local designer David Brown, seeks to respond to a nationwide urban problem by focusing on local solutions in addressing Chicago’s increasing number of vacant lots. The city has over 15,000 city owned such spaces across its 50 wards often serving as eyesores, crime attractants, and open wounds within the local communities impacted.  The 24th Ward (North Lawndale area), the subject of Brown’s proposal, is home to nearly 10% of the city’s vacant lots.  Instead of despair, Brown sees these spaces as vehicles for community development.  His plan calls for the development of spaces like roofs and walkways for community events; outdoor rooms connected to one another; or the creation of unique storefronts bordering along personal property.  The Chicago Loop Alliance has employed this idea to great effect with their ACTIVATE series, enlivening Loop alleyways as venues for urban arts celebrations (featuring live music and art exhibition). Under Brown, redeveloped vacant lots would serve to inspire the specific communities to which they belong by becoming beacons of community development specific to the unique cultural diversity within each ward—the end result changing perspective on what was once an eyesore to now an opportunity.

​Other proposals of interest include Span City, a Chicago River bridge house initiative that fuels new and unique ideas and opportunities for housing in the 42nd Ward; Birdfront, high-rise facades that improve livability for humans, while protecting birds and migratory wildlife in the 48th Ward; and Court/Yard, a project of the 38th Ward that employs therapy to provide safe spaces for mental health patients.

​The CAF promotes a mission that “inspires people to discover why design matters.”  Local in scope but intriguing for the larger implications that such an engaging project has on the larger community, 50 Designers, 50 Ideas, 50 Words is providing real solutions to real issues plaguing residents across the country and in do so inspires others to re-think and re-imagine concepts of community and space within the urban landscape, as good a reason by design matters as you’ll find anywhere.

50 Designers, 50 Ideas, 50 Words is on exhibit at CAF until December 31, 2016.  For additional information on the show, visit www.architecture.org. 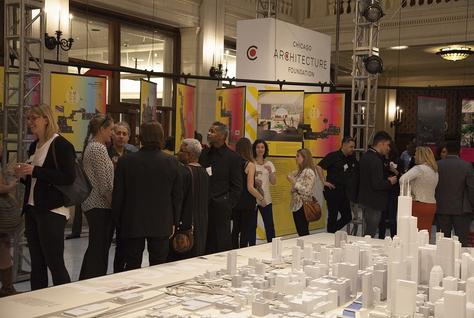 Urban Planning 2.0
The Chicago Architecture Foundation crowdsourced some of the world’s leading architects, designers and city planners for solutions to issues Chicago wards grapple with every day. A new exhibition presents some of the most compelling ideas they found.
By Patrick M. Curran II