This past October, another example of the unique partnership that exists between Chicago’s diverse cultural and artistic institutions launched with the three-month and multi-disciplinary citywide celebration, the Chicago Architecture Biennial. Back in September when Mayor Rahm Emanuel announced the historic event for the city of Chicago, what first came to mind were the massive skyscrapers and historic ornate structures that dot Chicago’s sprawling landscape. Said Mayor Emanuel at the announcement, “The City of Chicago is synonymous with leading architecture, from the world’s first modern skyscrapers to the forefront of urban design, which is why Chicago is naturally suited to host an architectural event of this scale. The study and discussion of architecture is ingrained in the civic fabric of Chicago, and the first-ever Chicago Architecture Biennial provides a one-of-a-kind opportunity for both seasoned professionals and everyday citizens to enjoy, discuss and critically examine the design that impacts the world in which we live.”

But as the initiative began to unfold this fall, arts lovers of seemingly all disciplines saw elements of the celebration. Complementing architectural biennial events in held in Venice, Italy, San Paulo, Brazil and Shenzhen/Hong Kong, the Chicago Architecture Biennial is a first for North America and its directive is extensive, with a robust schedule of public programming, performances (including a dance and architecture collaboration with Jessica Lang that premiered at Harris Theater this fall), lectures, panel discussions, workshops, exhibitions, tours, film screenings, and social events planned through January 3, 2016.

In an age of accelerated change, today’s architects, artists, designers, planners and activists are developing an extraordinary range of visionary ideas. Each of the Biennial’s programs is designed to explore issues at the heart of the practice of architecture, while inviting dialogue about how we build, inhabit and shape our world.

Ranging from a performance conceived by Bryony Roberts and the South Shore Drill Team that will activate Federal Plaza to lectures presented by Pritzker Prize winning architects, including Jacques Herzog and Thom Mayne, to citywide tours (and a tour of Frank Lloyd Wright’s renowned SC Johnson campus in Racine, Wisconsin), the Biennial’s programming has been offering the public a variety of ways to engage and explore the state of the art of architecture today.

As co-artistic director for the festival Sarah Herda explains, “The Biennial’s public programs (invites) audiences to think about architecture in unexpected ways. The Biennial provides a platform for the public to engage in a dialogue about what architecture means today and to interact with an amazing group of architects, artists and designers from around the world.”

Beginning with opening weekend festivities in October and continuing on over the course of three months, more than 100 cultural and educational institutions across the city and region (are presenting) over 200 collateral events on the occasion of the inaugural Chicago Architecture Biennial.” Herda points out that the Chicago Architecture Biennial and its partners are leveraging the city’s distinct legacy as an incubator to “take stock of the extraordinary ways in which architects, artists, designers, planners, activists and policy makers from around the world are tackling the most pressing issues of today,” all in an effort to develop new streams of thought about architecture and its impact on our world.

In its first two months, the Biennial has drawn a host of visitors to events highlighting Chicago’s unique architectural footprint and creative legacy. The initial response hasn’t gone unnoticed by Tyrone Tabing, executive director of the Chicago Architecture Biennial. “The reception has been fantastic,” says Tabing. “We’ve attracted more people than ever to the Cultural Center.”

As the unofficial reception hall for the Windy City, the Chicago Cultural Center’s four floors of exhibit space are teeming with activity they rarely enjoy. More than 175,000 people have attended the Biennial through October, representing a fifty-percent increase in foot traffic for the venue.

The sheer number of exhibits and events the Biennial boasts truly offer something for everyone, no matter his or her level of  understanding in the field of architectural. “Many of the projects in the Biennial are just plain visually engaging and do not require any advance knowledge of architecture or design,” Tabing  told me. “A good example of this are the windows of the Cultural Center, which can be seen from Millennium Park. These windows are activated with images of what one might find in those around the City of Chicago.” Tabing explains that details like air conditioning units or drapes adorning those windows take on an architectural element of their own, one that engages the eye and “captures the attention of the passerby,” something the Bienniel is meant to do, draw attention to the fascinating elements of the everyday world around us, elements that most fail to recognize on a daily basis.

With so many different architects and artists involved in the Biennial and with such an ambitious range of exhibits and work involved, getting a grasp on the entirety of the initiative can be a bit daunting.  For those overwhelmed by the task, Tabing suggests a visit to the Chicago Architectural Biennial Website (chicagoarchitecturalbiennial.org) to plan and map out those events that may foster the most interest for them. From there, a world of architectural treasures from grand to diminutive await.

Some ongoing events include the Jane Adams Hull-House Museum Free Architectural Tour, the 2015 Burnham Prize Competition:  Currencies of Architecture Exhibition, and the MCA Chicago Plaza Project: Alexandre de Cunha, profiling the work of one of the nation’s most innovative sculptors, makers and creators today.

Tabing suggests guests take in the full-scale houses that have been built within the Biennial exhibition at the Cultural Center. “Affordable housing is something that cities around the world are wrestling with, and I think the Biennial offers three unique solutions from around the world that address local housing needs.”

While the Biennial is hosting over 100 different participants, ranging from South Africa to Brazil, Chicago artists and architects are indeed well represented too, including works by Stanley Tigermann, founder of the ARCHEWORKS, a socially oriented design lab and school in Chicago.  Another Chicago professional/artist with works profiled in the Biennial is David Brown.  Brown is an Associate Professor at the University of Illinois at Chicago in the School of Architecture.  Brown’s works in the Biennial will focus on processes and approaches to urban design.

As the Biennial heads into its home stretch during the month of December,  there is still time to visit, explore and take in some of the ancillary events the Biennial is hosting. “We have weekly series that include film and lectures, and we also keep the place open late on Friday nights and invite people in to have a night of fun and entertainment at the Cultural Center,” Tabing explained.  For fans and students of architect, Tabing has a special event in mind. The Biennial will play host to Zaha Hadid in December. The “International “starchitect” will to offer her worldview of architecture and design, further proof that the festival truly has something for everyone.

The inaugural Chicago Architecture Biennial has already been nothing short of a success. Hundreds of exhibits and thousands of visitors have proven that Chicago definitely has an appetite for architecture and an insatiable interest that quite possibly will help shape the future of our urban, suburban and rural spaces. And those with a bug for design can take a step further with resources the Biennial provides for deeper exploration. Books about architecture and cities, resources on urban design and other items including a guidebook of the Biennial are all available at the bookstore of the city’s very own “reception hall,” the Chicago Cultural Center, for those who want to delve even deeper into the world of architecture and quite possibly start shaping the future themselves.

The Chicago Architecture Biennial runs through January 3rd at venues across the city. 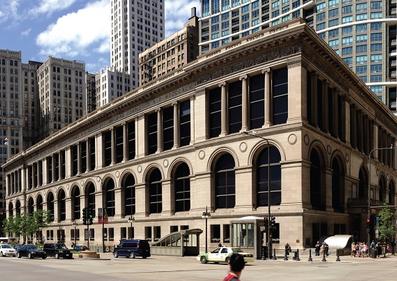 The first Chicago Architecture Biennial squares up the Windy City's design prowess, celebrating urban design from the iconic to the diminutive via a three-month, multi-disciplinary citywide festival that has drawn in record numbers and sparked unprecedented interest in the state of the art of Chicago architecture.