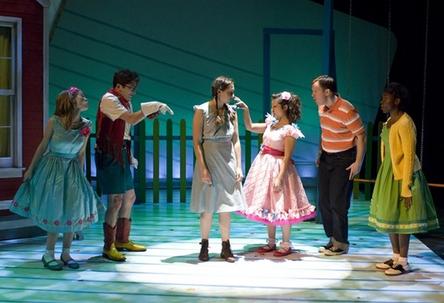 On December 12, Chicago Children's Theatre's (CCT) board members, staff, artists and supporters will join with city officials, VIPs and community partners at a groundbreaking ceremony for the company's new home at 100 S. Racine Avenue in Chicago's West Loop.

At the event, Chicago Children's Theatre officials will celebrate the launch of construction on the company's new home, the former, long-shuttered 12th District Police Station at the intersection of Monroe and Racine streets, which will be converted into a lavish, mixed-use performing arts facility with two theaters, offices, classrooms, parking and green space.

"After 10 years of staging our productions and educational programs at museums, theaters and other venues throughout the city and suburbs, our new home will provide CCT with a solid foundation to engage, inspire and serve all Chicagoland families," noted Chicago Children's Theater’s co-founder and artistic director, Jacqueline Russell.

"We so look forward to graduating from an itinerant company to a theater with a permanent home, allowing us to better serve the children of Chicago, grow our education programming, provide a cultural anchor for this newly revitalized neighborhood and further establish our presence on a national scale," Russell added.

The ceremony will officially kick off Phase One of construction - converting the existing building into an open, inviting cultural destination including a flexible studio theater, classrooms and supporting spaces. Phase One is targeted to be completed by early 2017.

Phase Two will be the addition of a new, state-of-the-art, 299-seat mainstage theater and other supporting spaces. Phase Two is slated to be completed in 2020.

In the interim, Chicago Children's Theatre will continue to present its productions at its current performance home, the Ruth Page Center for the Arts, 1016 N. Dearborn St. in Chicago's Gold Coast neighborhood.

The shuttered police station was purchased earlier this year from the City of Chicago, with additional project funding from the State of Illinois. The design team at Wheeler Kearns Architects - a Chicago-based firm that counts Old Town School of Folk Music and Wolcott School among past clients - is collaborating with Working Group One Architects to create a space that emphasizes accessibility and transparency to the community. Pepper Construction is the project's general contractor.

Since its launch in 2005, Chicago Children's Theatre has become recognized as the city's largest professional theater company devoted exclusively to children and young families. Today, CCT provides high quality, year-round children's programming that inspires young people and families to lead lives of adventure, courage and curiosity. CCT also honors a commitment to low-income families and children with special needs. In partnership with Chicago Public Schools and Target, CCT has offered free tickets and transportation to more than 5,000 Chicago-area low-income students each season.