Acclaimed Chicago actors Boyd Harris and Layne Manzer recently took the leap of faith and founded a theater company in the Windy City.  Do we really need another one? You might ask.

“Everything about our company is atypical,” Harris, 33, answers, pointing out that the newly-formed Cole Theatre consists of exactly two members—Harris and Manzer, artistic director and managing director, respectively.

“And that doesn’t matter,” Manzer, also 33, adds.  “The theater community of Chicago has become one big ensemble anyway.  Everyone works with everyone else in other companies; we’re all interconnected.”  In other words, the newly minted Cole Theatre will draw upon the city’s large and incestuous talent pool to mount its productions, from the cast to the crew.  In fact, the company’s first show—Ecstasy, by internationally-famous film director and playwright Mike Leigh—is already underway with an ensemble of actors from other companies, including—along with Harris and Manzer—Maura Kidwell, Michaela Petro, Lauren Pizzi, and Joel Reitsma. The director is Jeff Award-winner Shade Murray, who had been a member of Roadworks Productions—a company that first produced Ecstasy in Chicago in 1997 and took it to Los Angeles for a very successful run.

“The name ‘Cole’ is Greek for ‘people’s victory,” Manzer explains, “so our battle cry is ‘victory of the people.’”  In other words, the mission for the itinerant theater company is to work with artists who have been active in the Chicago theater community for years.

Manzer grew up as a dairy farm kid in small-town Pierce, Nebraska.  He worked cattle in a sports town, where there wasn’t much temperance toward the arts. “In fact, I wanted to be a priest at first,” he says, rolling his eyes.  “But eventually I realized that someday I wanted a family, so that plan went out the window.”  As a child, most of Manzer’s exposure to acting was from television, naturally.  “I remember watching Growing Pains—and there was an episode where they did a production of Our Town. That was a big influence on me. Then, in high school, I actually played George in a class production. I was a junior at the time, and Emily was played by a senior. She was mortified that she had to kiss a junior.”

Irreparably hooked, Manzer attended the University of Nebraska in Lincoln and earned a B.A. in theater.  After working in his own company in Lincoln, he moved to Chicago in 2006. “I got on board with the company that ultimately became The Plagiarist, and I guess I made a name for myself around town as an actor and also as a someone that was pretty good at the business side of theater management.”  And then he met Boyd Harris in 2009 at The School at Steppenwolf summer program.

Harris was born and raised in Chicago, where he grew up on movies and going to the theater from an early age. His aunt, Moira Harris, is married to Gary Sinise, so young Harris had much exposure to Steppenwolf Theatre in its infancy. “I think I saw every production between ‘83 to ‘89,’” he says proudly.  Despite this background, Harris didn’t study theater.  He became involved in a variety of sports and then attended DePaul University, earning a B.A. in political science with a minor in French.

“Then I tried law school,” he says, rolling his eyes.  “But I found that very depressing.  There were no windows.  And, I had an accident and broke my ankle.  I was on crutches for a year, so I dropped out.”  Harris became a personal trainer for a while, but his memories of the theater haunted him.  “I kept thinking about acting, so I started taking classes at age 25.”  After a fortuitous meeting with Steppenwolf’s casting director at the time, Erica Daniels, he received valuable advice and guidance. Since then, like Manzer, he has become a respected actor in the city.

The Cole Theatre was Harris’ brainchild.  It began in 2012 when he filed the necessary papers to launch a non-profit 501c3 Equity company.  “I wanted to create something and attract other likeminded artists.”  With Manzer on board, the company was born and the entrepreneurs set about picking the material for a first production.

“I had a play in mind, but the set was too intense for a first show,” Harris insists.  “So I started looking at other ensemble plays that were good character studies and sort of gritty—Chicago is known for grittiness in theater, right?  Well, Ecstasy is one of the great British ensemble plays, and it’s about class struggles, which kind of fits our company’s mission—victory for the people—and it’s also got romance, some beautiful dark humor, and its message is relevant today.”

Manzer adds that they already have a “blackboard season,” in the planning stages.  “Since it can be expensive to buy the rights to existing plays, we’re probably going to concentrate on original works in the future.  That said, nothing is set in stone.”

“Like I said,” Harris repeats, “everything about our company is atypical!” 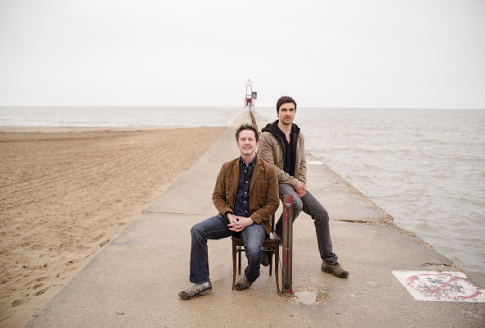