The Chicago Department of Cultural Affairs and Special Events (DCASE) has announced an evening concert series at the Chicago Cultural Center (78 E. Washington Street) with performances by international acts Baladino on Monday, March 31 and Marco Calliari on Wednesday, April 2. Additionally, R WE WHO R WE will give a special Loops and Variations concert on Thursday, April 24. All performances are free and begin at 6:30 p.m. in the Claudia Cassidy Theater (second floor north).

As part of the Arts Midwest World Fest tour, the Israeli folk ensemble Baladino will offer a fresh and authentic interpretation of traditional Jewish Saphardic and Ladino melodies to audiences at the Chicago Cultural Center, March 31 at 6:30 p.m. Embracing the old and the new, ensemble members perform on instruments both ancient and modern while adding their own youthful energy influenced by jazz improvisation and contemporary influences.

On Wednesday, April 2, Quebec native Marco Calliari brings his energetic cultural blend of Italian folklore and jazz along with his festive spirit to the Chicago Cultural Center at 6:30 p.m. With the recent release of his new album, MI RICORDO, Calliari rarely strays from his native roots as he remakes his own versions of traditional Italian songs, including “L’Italiano,” “Bella Ciao” and “L’Americano.”

Loops and Variations fans will receive a special treat on the evening of Thursday, April 24 at 6:30 p.m. when R WE WHO R WE, featuring composer-performers Ted Hearne (voice, vocal processing) and Philip White (mixer feedback, electronics), take to the stage of the Claudia Cassidy Theater at the Chicago Cultural Center. Borrowing the mash-up style of Girl Talk and the experimental methods of Merzbow, the electronic artists provide tribute and commentary to both classical and ephemeral artists of the pop landscape.

For more information on the varied slate of arts programming at the Chicago Cultural Center presented by the Department of Cultural Affairs and Special Events, visit chicagoculturalcenter.org.

Members of the international group Baladino (photo courtesy of the ensemble). 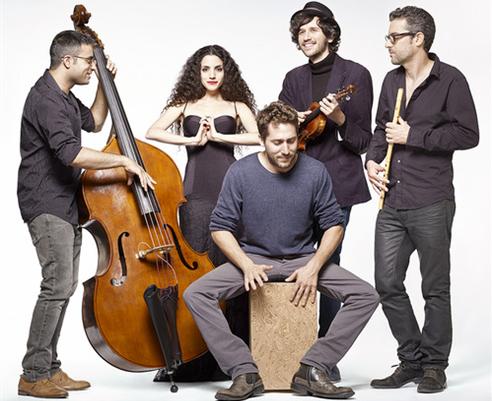