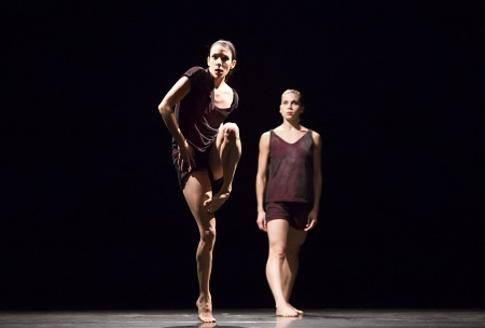 The GUIDE to Chicago's New Season of Dance in Chicago

Fresh perspectives from some of Chicago’s most respected artists combine with an unparalleled lineup of national and international visiting companies in the upcoming Chicago dance season. Auditorium Theatre of Roosevelt University’s “Made in Chicago” series will re-envision city neighborhoods, explore monumental moments of Chicago history, and reveal new creations from local dance veterans. Harris Theater will host an array of amazing performers from both near and far, and there's that much-anticipated collaboration between Hubbard Street Dance Chicago (HSDC) and improvisational/sketch comedy group The Second City. These, and many more of our favorite venues, welcome a brilliant dance season of new imaginings and favorite classics from talented companies both large and small.

Auditorium Theatre (auditoriumtheatre.org) presents a wealth of local talent in its “Made in Chicago” Dance Series as the landmark  venue marks its 125th anniversary. Kicking off the series on November 29, Thodos Dance Chicago reimagines the 1893 World’s Fair with “The White City—Chicago’s Columbian Exposition of 1893” (2011). Erik Larsen’s best-selling novel, Devil in the White City, inspired the production, choreographed by the company’s founder Melissa Thodos and Tony award-winning choreographer Ann Reinking.

The Chicago-focused series also features a mixed repertoire program from Giordano Dance Chicago October 24 and 25, including “Moving Sidewalks,” a clever work featuring the evolving mid-19th century Pilsen neighborhood. Then, in the spring, River North Dance Chicago company veteran Hanna Bricston (who began training at RNDC at the age of twelve!) premieres a new work for the company’s female dancers at the Auditorium Theatre. The piece is Bricston’s first commissioned choreographic work, and it will debut alongside Adam Barruch’s third collaboration with RNDC, set for the full company, during the March 28 performance.

The Museum of Contemporary Art (mcachicago.org) has commissioned a new work, “Power Goes,” from Chicago’s political dance dynamo Carrie Hanson, which will premiere at the museum March 20-22. Hanson’s latest piece delves into the relationship between the body, power, and language, drawing upon the figure of President Lyndon B. Johnson to explore these concepts. Playwright Stuart Flack collaborated with Hanson and her impressive dance company, The Seldoms, to explore how power is acquired, taken, wielded, expressed and deployed in this multidisciplinary performance.

On the heels of its historic 10th anniversary season, Harris Theater for Music and Dance  (harristheaterchicago.org) will usher in the debut of tha unique collaboration between two of Chicago’s most beloved entertainment institutions—HSDC and The Second City—October 16 - 19. The highly versatile performers belonging to each group will improv their way through what is likely to be this season’s most hilarious dance production. “Many of our works,” HSDC artistic director Glenn Edgerton notes, “are devised in collaboration in ways quite similar to how The Second City’s members create their shows. Improvisation is a key part of our DNA on both sides. So it’s a natural fit for us to join forces, and I’m thrilled to watch this project make its way to the stage.”

HSDC (hubbardstreetdance.com) will put on three other productions this season, including their Summer Series (June 11-14, 2015), which will feature only the works of resident choreographer Alejandro Cerrudo. Cerrudo himself will be quite busy this season, not just with HSDC, but also in performances of “Restless Creature,” a series of duets for which he collaborated with New York City Ballet principal Wendy Wheelan. Last year’s Guide featured “Restless Creature” as a must-see production for the 2013-2014 season, but the tour was postponed after Wheelan sustained a hip injury. She has since returned to the stage, touring with Cerrudo and three other choreographers who collaborated on the suite of duets, Kyle Abraham, Josh Beamish, and Brian Brooks. “Restless Creature” makes its way to Harris Theater—the venue Wheelan says she had in mind while developing the project—on January 21, 2015.

Wheelan, of course, will not be the only famous ballerina to grace Chicago stages this year. In fact, many of the globe’s most renowned companies will converge upon Auditorium Theatre during the 2014-15 season. The American Ballet Theater takes the stage October 3 - 5 with a mixed repertoire program including Twyla Tharp’s “Bach Partita” and “Sinatra Suite,” as well as Clark Tippet’s “Some Assembly Required” and Jerome Robbins’ beloved “Fancy Free.” Chicago’s own Joffrey Ballet treats viewers to a whopping five programs (adding an extra production to their usual four), including Christopher Wheeldon’s “Swan Lake” October 15 - 26. Wheeldon’s version reimagines the quintessential classical ballet, setting it in the studios of the Paris Opera Ballet in the 19th century. On November 21 - 23, Auditorium Theatre hosts the Dance Theatre of Harlem for the first time in sixteen years. The company will perform a mixed repertoire performance that includes “Gloria,” “Contested Space,” and “past-carry-forward.” Eifman Ballet returns to Chicago May 8 - 10, 2015 to present the American premiere of “Tender is the Night,” a story ballet set to jazz and inspired by F. Scott Fitzgerald’s final novel of the same name. The Royal Ballet will close the venue’s season with Carlos Acosta's production of “Don Quixote,” June 18 - 21, 2015.

International ballet companies represent only a fraction of the global visitors Chicago will host during the 2014-15 season. In addition to ballet, Sònia Sánchez makes her U.S. debut at the Museum of Contemporary Art, February 13 - 15 with “Le Ca” (The Id), a reinvention of flamenco technique set to live guitar, vocals, and sound mixing. The vibrant Brazilian dance troupe, Grupo Corpo, makes its Auditorium Theatre debut Feburary 28 - March 1, with a blend of traditional Brazilian dance and western modern movement. Anne Teresa de Keersmaeker’s contemporary dance company, Rosas, will visit from Belgium, performing “Rosas danst Rosas” at the MCA October 9 - 12. One of the world’s most prominent contemporary choreographers, de Keersmaeker created “Rosas danst Rosas” for her company in 1983, generating international attention. The piece has since become iconic among dance groups. In fact, a sequence from this piece was mirrored in Beyonce’s music video 2011 Countdown, sparking a plagiarism controversy (and heightening discussion about borrowing versus stealing in art).

On October 28 - 29, at Harris Theater, Beijing Dance Theatre will present “Wild Grass,” a large-scale full-evening work in three sections, based on the poetry of Lu Xun (1881–1936). The piece was created by choreographer Wang Yuanyuan, a collaborator on the opening ceremony of the 2008 Beijing Olympic Games.

Additionally, Minneapolis-based mother-daughter team Ranee and Aparna Ramaswamy will bring their classical Indian dance company Ragamala to the MCA April 10 - 12, 2015, presenting “Song of the Jasmine,” a unique collaboration with jazz saxophonist and composer Rudresh Mahanthappa informed by their shared bicultural identities as Indian Americans. An experiment with improvisation, “Song of the Jasmine” revisits the medieval South Indian poet, Andal, with live music and classical dancers performing under a canopy of brass bells.

Dotting the landscape of this stellar season in Chicago dance will be several hidden gems that might be missed amid such a wild flurry of dance's elite in the Windy City. Chicago's own Hedwig Dances will celebrate its 30th season under the direction of Jan Bartoszek, expanding its multi-year collaboration with DanzAbierta, Cuba’s preeminent contemporary dance company. They'll present “Trade Winds” by Bartoszek and DanzAbierta’s resident choreographer Susana Pous’ “Aires de Cambio” (Air of Change) at the Dance Center of Columbia College (www.colum.edu/dance_center), October 9 - 11.

And also at the Dance Center, Urban Bush Women celebrates its 30th season under the direction of African-American choreographer Jawole Zollar, featuring a portion of works based on the music and legacy of John Coltrane. The performances run from March 19 - 21, 2015. For dance—for all of the emotion, engagement, and entertainment it elicits—there is no season quite like a Chicago season. With hardly a performance-free weekend from September through June (yes, there are even more performances than this article could contain), one easily sees how Chicago has gained its remarkable reputation for dance.