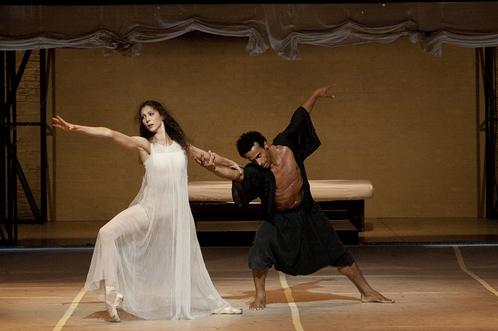 Draping the theater in large carpet tapestries, sets provide a cozy warmth to the Harris Theater stage. The typical velvet curtain is not present, exposing the stage containing a large hut structure made of billowing white fabric and metal scaffolding. The audience, enveloped in the warmth converses in hushed tones until the lights fade, signaling the start of the show. Immediately the coziness is shattered as a band of rowdy men, The Five Soldiers, comes bursting into the theater from all sides, yelling and screaming. Each of the characters from the story begin to emerge in what feels like a movie montage of introductions—each character taking a solo, and then drifting back into the ever-shifting chorus of dancers walking about the stage.

​Costumes span many historical eras and seem to symbolize their character’s role in modern society: a loyal bellboy; a businessman taking pictures with a cell phone; a group of women; the Venetians draped in white, flowing dresses; Iago; Emilia and La Primavera. Classically dressed characters juxtapose nicely with characters in modern dress, adding an interesting element for audience to ponder.

Stand out moments include the duet in the first act between Desdemona and Othello. Though set to an Arvo Part piece that is somewhat overused, the dancers execute the duet with incredible tenderness, inspiring this viewer to lean in and sigh.

Dancer Ivan Urban represents Iago and his wrath particularly well in his solo. His dancing is strong, and his acting ices the cake as he aptly employs gestures and facial expressions to expose his demented character.

​Having all the pieces of a Shakespearian tragedy, this particular telling of the story plays well with a modern audience, captures the true themes of the work and exhibits an incredible degree of human beauty, all in one ballet. Dancers and choreography together, capture the characters as they navigate the scope of one another’s damage and wrestle with the consequences of forming relationships with each other.

​While Neumeier’s choreography and conception of the story can be difficult for some to digest at times with incredibly explicit orgy scenes, and abuse scenes that may indeed be hard to watch, the end result, a stunning, tear-jerking duet justifies the visual excess. By the end, witnessing the roughness between characters is necessary, in order to feel the depth of emotion in the final, emotional duet. The Hamburg Ballet presenting John Neumeier’s Othello feels heart wrenching and exciting at the same time. For anyone familiar with Othello, the company presents it with an incredibly fresh spin but keeps the true message crystal clear.