December 18, 2016 - The Joffrey Ballet’s new Nutcracker, choreographed by Broadway sensation Christopher Wheeldon, is the most highly anticipated dance event this city has seen in quite some time, and, with a $4 million price tag, also the most expensive. With the high production value, and the impressive list of heavily awarded artists on its team, this ballet was set to awe.

Sunday’s performance appropriately welcomed excited Chicagoans from the blustery winter snowfall into the belly of the Auditorium Theater. Set in 1892 in Chicago, the winter before the famed World’s Fair is set to open, Wheeldon’s storyline already tugs at the heartstrings of its home audience. With a more “Americanized” storyline placing the main character Marie (Clara in some versions) in an immigrant family during the turn of the century, this production has true pride for the Windy City. And while some familiar and beloved facets of the holiday tradition may be absent, new intriguing additions have emerged to dazzle audiences during the holiday season.

True-to-size rat puppets are introduced in the very first scene, adding whimsy and humor, and a hint of the expected magic that is to come. The opening tableau that is included in many Nutcracker performances includes introductions, grandiose gestures and children playing cute, choreographed pranks on the Drosselmeier character (the Fair’s Impresario, in this version).

Though the party scene misses its usual rich colors and sparkling decor, the character interactions make up much of the warmth settling us in for the familiar and busy Christmas party. Wheeldon’s innovation in this production reaches beyond the choreography, placing three musicians right onstage with the dancers playing music during the first act. The musical score is also manipulated slightly, to reflect the new story, and while this idea is appreciated, the sheer grandeur of Tchaikovsky's Nutcracker March is conspicuously missed by this change.

Other changes reflect new and dazzling aspects of Wheeldon’s vision for a Chicago-centric theme. The ballet’s traditional dolls are replaced with a lively puppet show; when the Impresario gathers together his “gifts” for the children, he places them behind a lit curtain and they dazzlingly transform into the moving, and breathing, skyline of the World’s Fair.

The battle scene is full of excitement and wit, complete with horseback soldiers and a return of the those spirited rat puppets.

Most indicative of Chicago, the snow scene is chaotic and cold, save for the cute children performers with their big, warm smiles. Wheeldon’s lack of traditional structure is evident in this scene the most, and caution in some of the usually stalwart dancers betrays a need to settle yet into the choreography.

For families and dance aficionados alike, many of the favorite elements of the Robert Joffrey Nutcracker are perhaps missing now, but the company openly, and enthusiastically invites audiences to welcome and cultivate new favorites. And while they may leave Auditorium Theatre without the traditional Sugar Plums dancing in their heads, perhaps the striking Queen of the Fair will make its way into Chicago’s hearts this season with new traditions and a newfound appreciation for the timeless story. Only time will tell.

​Joffrey Ballet's The Nutcracker will be onstage at the Auditorium Theatre of Roosevelt University through December 30, 2016. Visit auditoriumtheatre.org for more details. 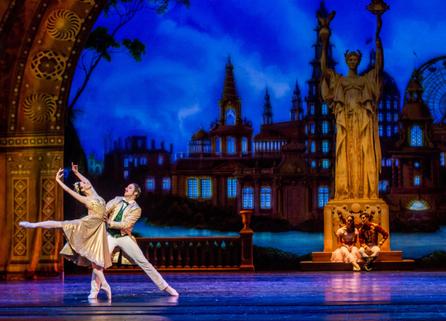