December 11, 2014 - Sounds of the Chicago Philharmonic warming up—and chilly air pouring through the front doors of the Auditorium theater—filled a packed house with anticipation for a favorite holiday tradition Thursday night. The Joffrey Ballet, presenting The Nutcracker, delivered a romantic evening with just the right dose of holiday warmth. The Nutcracker, the classic story beginning with a grand party at the home of the Stahlbaums and whisking audiences through the flashy Land of Snow and into the sparkling Land of Sweets, gets an American facelift in Robert Joffrey’s interpretation of the ballet. Premiering in 1987, Joffrey’s Nutcracker is the first original Nutcracker Ballet by any American company.

From first class ballet principles to impeccably rehearsed children, the entire production happens with the professionalism and polish one would expect from a company of the highest rank.

Fernando Duarte, playing Fritz, stole the show quite early on with a fun and flamboyant rendition of party scene antics, yet he lost just a bit of his spark with a series of turns in the Snow Scene. Before snow, however, another high point arrived when Clara’s nutcracker doll transformed into a life-sized soldier and battled the Mouse King. Mice in tin heads and battle-wear provided deft comedy in the whimsical scene. Riding on “horses” that sport mouse heads, no detail was missed in Joffrey’s entertaining battle scene.

After a brief intermission audience members settled in for their journey through the Sugar Plum Fairy’s Land of Sweets.  Mahallia Ward proved the most captivating in her performance as Coffee from Arabia. Bright costumes captured attention in “Tea from China,” and high energy carried nicely through “Nougats from Russia.”

A crowd favorite, the enormous puppet, Mother Ginger, charmed with her big blinking eyes, and local children gave a wonderfully strong performance as the spirited “bon-bons” emerging from her skirt. Amanda Assucena and Jacqueline Moscicke provided graceful Marzipan Shepherdesses and April Daly showed a softness in the Waltz of the Flowers that had been missing in her earlier Snow Queen.

Finally, Amber Neumann and Ogulcan Borova finished in the classical Grand Pas De Duex. Neumann’s colorful style might have overwhelmed the scope of her role as the Sugar Plum Fairy, but her technical prowess cannot be denied. With some dazzling performances, and despite a few hiccups for a Thursday night company, Joffrey’s strength as an ensemble in the finale whisked Clara and her Uncle Drosselmeyer far away from her sparkling dream. And after, a standing ovation sent spectators back into the Chicago streets with warmer hearts still.

The Joffrey's Nutcracker will run at Auditorum Theatre of Roosevelt University through December 28.

Joffrey's Nutcracker Shines as Brightly as Ever 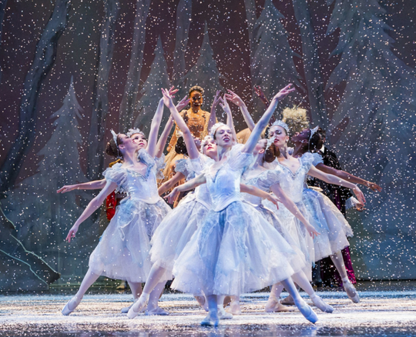