Today the Chicago Dancemakers Forum (CDF) and its executive directir, Ginger Farley have announced the four recipients of the 2016 CDF Lab Artist Awards. The recipients, Pranita Jain, Carole McCurdy, Onye Ozuzu and Catherine Sullivan, will each be granted $15,000 by CDF, and receive 12 months of valuable mentorship and peer support.

Now in its second decade of supporting individual dancemakers as they explore and develop new work, CDF works to foster excellence and innovation in dance, while building relationships among dance artists, audiences, funders and presenters. The organization provides choreographers with time and resources for interaction, inquiry and innovation, while fostering a broad environment for appreciation of, support for, and access to dance.

Says Farley, “I am eager for a year of creative exchange with these four extraordinary, Chicago-based artists. One of the key things we have heard from members of our city’s dance communities, is that artists are thirsty for dialogue and interaction bridging aesthetic and cultural distinctions, and that they yearn for greater exchange among their disciplines and practices. The areas of inquiry that Jain, McCurdy, Ozuzu and Sullivan have proposed provide a rich ground for individual contemplation as well as stimulating interaction between them, as they embark on these new creations.”

​A panel consisting of local and national dance leaders and previous Lab Artist awardees selected four talented artists working in the field of dance at key moments in their artistic development. According to CDF, awardees must demonstrates a clear vision, a solid body of work, a compelling line of inquiry and a firmly grounded work ethic to be considered for the award. Executed through two rounds of applications — the first being open and a second finalist round — the selection process is rigorous, competitive and educational.

Throughout their year of CDF support, Lab Artists participate in regular roundtable meetings designed to strengthen relationships with their peers and people of influence in the field. Awardees view the grants as essential ingredients in furthering their artistic growth, and encouraging their visibility.

Says Zachary Whittenburg, the CDF consortium member representing Hubbard Street Dance Chicago, “Each year, the Lab Artist selection process is as illuminating as it is competitive, and 2016 was no exception. Among the trends emerging from this particular group of proposals were shared interests in labor practices, and deeply considered questions about identity. Multiple applicants also expressed some degree of conflict between challenging and upholding time-honored traditions to which they were dedicated. The full experience has only reinforced my enthusiasm about the vitality of dance in Chicago, and reconfirmed its effectiveness as an art form uniquely suited to reflect contemporary life.”

​The four 2016 Lab Artists have been chosen for their outstanding creative visions, and their potential for artistic growth. Each artist has identified a unique path of creative investigation, which will lead to an original, public-facing project.

​All four artists will be present and recognized at the Chicago Dancemakers Forum’s 2016 Lab Artist Awards Celebration, to be held on Friday, July 15 beginning at 5:30 p.m. at the Arts Club of Chicago, located at 201 East Ontario Street in Chicago. The gala evening and dinner will also feature live, site-specific performances by Jessica Cornish, and 2015 CDF Lab Artist Jamal “Litebulb” Oliver with footwork crew The Era. For tickets and sponsorship information, visit chicagodancemakersforum.org or call 773-580-9322 in advance. 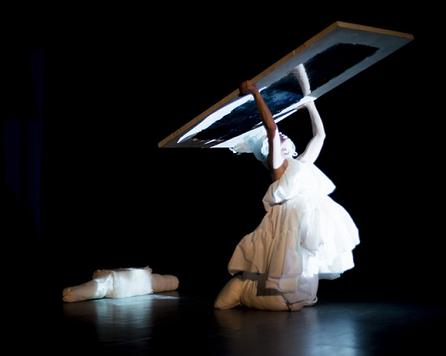 Twofold (2015) by Carole McCurdy, one of four recipients of the Chicago Dancemakers Forum's 2016 Lab Artists Awards (photo by IAMKIAM Studios).