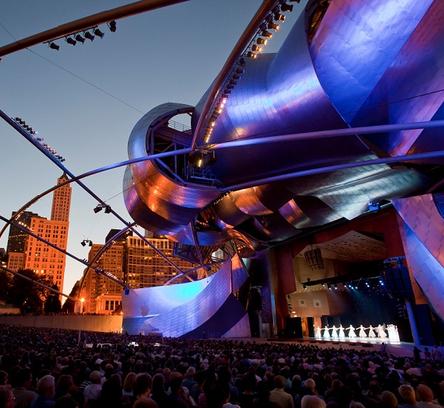 The Chicago Dancing Festival will celebrate its 10th anniversary of free programming featuring performances by leading ballet, modern and contemporary dancers from across the country this August. Just as the festival draws from top dance companies, this year’s program will once again be presented in Chicago’s top downtown venues including the Harris Theater for Music and Dance, the Museum of Contemporary Art and the Jay Pritzker Pavilion at Millennium Park plus the highly anticipated return to Chicago’s Landmark Stage, the Auditorium Theatre.

Co-produced by renowned choreographer Lar Lubovitch and highly esteemed Chicago dancer Jay Franke, the Chicago Dancing Festival has provided increased accessibility to dance and raised Chicago’s profile as a premiere dance destination. Over the last decade, the festival has presented more than 100 exceptional dance companies from Chicago and around the world, commissioned eight world premiere performances by local and national artists, and performed before more than 90,000 people while maintaining free admission for everyone.

“In 2006, we envisioned a way to provide accessibility of high-quality dance to enrich the lives of Chicagoans," said Franke. "We've received generous support through so many individuals that we've been able to bring a diverse range of world- class companies to Chicago stages to share their technique and transformative power of dance. This year, we honor our 10th anniversary with our most beloved choreographers, prestigious artists, and works from the festival's 10-year history. I'm proud to say that we have helped raise the national and international profile of dance in Chicago and are humbled to have been able to present programs that speak to the audience and dance lovers of all ages."

​Highlights of the 2016 Festival include a Chicago Dancing Festival company debut by the nationally acclaimed Pennsylvania Ballet; the return of audience favorites and original commissions from the festival’s 10-year history (including works by Balanchine, William Forsythe, Lar Lubovitch and Christopher Wheeldon); and an evening-length program devoted to “Modern Men” featuring all-male performances and debuts by international choregrapher and founder of Move: the Company Joshua Beamish.

Additional details for the 2016 Chicago Dancing Festival, which takes place August 23 through 27, 2016, including repertoire, to be announced at a future date, are available at the festival website: www.chicagodancingfestival.com.