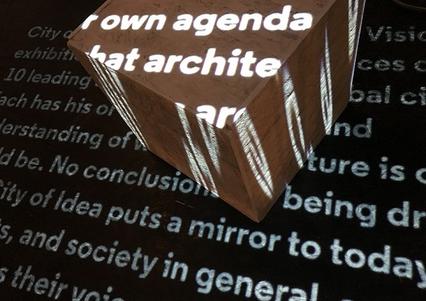 Chicago Design Museum (ChiDM) is will present the North American debut of the exhibition City of Ideas: Architects’ Voices and Visions, opening on October 28, 2016 and running through February 25, 2017 at the museum's home in Block Thirty Seven in the Chicago Loop. The traveling exhibition is curated by architect and writer Vladimir Belogolovsky and showcases his interviews with visionary architects through text, audio recordings, images and projections. Before arriving at ChiDM, the display debuted at Tin Sheds Gallery at the University of Sydney.

“We are very excited to bring this exhibition, which takes a look at where architecture is going right now, to the birthplace of the skyscraper,” says Matthew Terdich, executive creative director of ChiDM. “We hope City of Ideas challenges visitors who might not normally think about architecture to consider buildings and spaces around them on a conceptual level.”

​City of Ideas: Architects’ Voices and Visions is an experiential exhibit. Attendees will enter an ongoing conversation about what architecture is and what it should do. Can architecture and design solve social and environmental problems? Where and how does the value of individual expression and vision meet the need for collaboration and teamwork? These kinds of questions will be addressed through multimedia installations that merge the voices of several high-profile architects, such as Jeanne Gang and Kengo Kuma, with visual representations of their work. A stage in the center of the exhibit space will feature presentations and performances from the Chicago Architecture Foundation, the Poetry Foundation and other Chicago-area partners, making the conversation about architecture an active and local discussion.

"Chicago is home to a number of very original voices in architecture ... I hope City of Ideas will contribute to the overall professional discourse and spark new interpretations and visions for what architecture could be,” says Belogolovsky. “One of the featured voices gathered here from all over the world is Jeanne Gang, a local force behind reinventing our preconceptions about the discipline. I am going to Chicago with an open mind and I look forward to learning about what visitors will make of this provocation."

​Founded in 2012, The Chicago Design Museum proffers a mission to strengthen design culture and build community. Through education, experiences, exhibitions and outreach, ChiDM works to foster critical conversations and position Chicago’s rich design history and dynamic creative networks within an ongoing, global context, celebrating both the city’s individualism and its role in an interdependent, international discipline. The museum is located on the third floor of Block Thirty Seven, 108 N. State St. in downtown Chicago.