Even though he is unprepared for army training, the boy’s natural knack for camaraderie proves more successful than his amore’s militant survival skills. In fact, her “kill-or-be-killed” attitude comes back to bite her when she nearly dies from eating an animal in the woods. Ironically, while carnage and combat are her preferred ways of life, she actually lives more fully when caring for animals—and her fellow man.

Thomas Cailley, who wrote the screenplay with Claude Le Pape, enhances the believability of the leads’ performances with the intimacy of a handheld camera and naturally-lit shots. Despite the dated ’80s-like soundtrack, the film feels fresh as it deals with contemporary issues from unemployment and global recession to the fragility of nature and an impending apocalypse. Although these are serious subjects, Cailley avoids heavy-handedness by offering a light touch that is comic but never glib. In the end, his characters may lose the war, but they win the battle of the sexes. 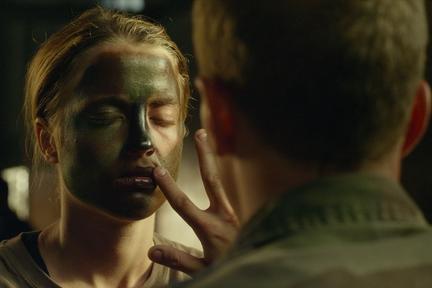