Tasting stations under sparkling white tents dotted Millennium Park, boasting delightfully inventive and scrumptious bites like Maple Leaf Farms’ (Leesburg, IN) Applewood Smoked Duck Bacon, topped with spiced apple ginger chutney and creamy whipped brie, along with a host of diverse options that dazzled and sated amidst a beautiful Chicago that at times threatened showers, if slightly, but never really made good.

An uncharacteristically hot fall afternoon sun didn't daunt the throngs who eagerly braved long lines to taste the wares of some of the city's top cuisine artists. One of my favorites included Main St. Café’s (Pilsen) Cinnamon Chipotle Chicken Fajita delicately draped atop a bed of sofritas coconut rice—mouth-watering! Also popular this year was Chef Art Smith’s (Blue Door Kitchen) Salmon and Rutabaga Latke, topped with brown butter and apple. Farm-to-table guru Smith has long been known for his artful play on comfort food, but warm flannel PJs on a crisp Chicago morning doesn’t come close to the coziness packed into this bite.

​Of course, fine dining is always a staple at Chicago Gourmet, and this year’s festival didn’t disappoint. Cité Restaurant (Lake Point Tower in Chicago) offered a beautifully balanced Burgundy Escargot with a lime-ginger vinaigrette perched atop a flaky puff pastry. With escargot sautéed in cognac, shallots and garlic butter, this bite offered a brilliant burst of flavor that was tough to resist.

As in years past, wines and spirits maintained a commanding presence in Chicago Gourmet with top vintners and spirits producers from around the globe trotting out the best and brightest vintages to soothe and sate a broad pallet of tastes. Northern California winemaker Carpe Diem was on hand with glassfuls of their 2012 Chardonnay and Pinot Noir varieties. And one of the many spirits providers, Glenmorangie offered varieties of their single malt scotch whisky for those looking for weightier fare.

First ever festival host, celebrity chef Rick Bayless lent his touch to many noteworthy cooking seminars that peppered the festival’s schedule throughout the weekend.

Special events like the Hamburger Hop, the hottest burger showdown this side of the the Big Apple, fired things up nicely with top chefs and cooks from the city’s elite steakhouses in a gourmet skirmish for the title of Best Burger in the city. A celebrity panel of judges named chef-owner of Bistronomic, Martial Noguier, this year’s winner for his flavorful gourmet burger with shallots, Dijon mustard and house-made pate on a brioche bun.

​Also popular this year, Country Financial’s special BBQ, Beer & Bourbon Pavilion, featuring more than 15 Chicago chefs, served up barbecued goodness from around the city on Millennium Park’s stunning South Promenade, and with brews from countless renowned brewing companies and live music all weekend long, there wasn’t an unsatisfied pallet in the park. 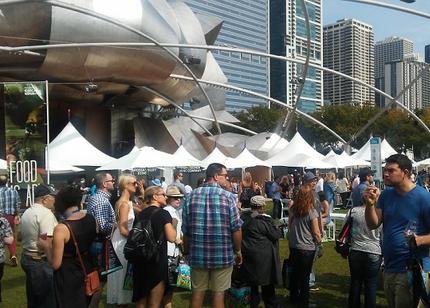 Patrons of Chicago Gourmet's festival of Food and Wine braved long lines to taste the wares of some of the city's top flight chefs and fine dining restaurants and wine and spirits providers this September (photo by Brad Zoells).