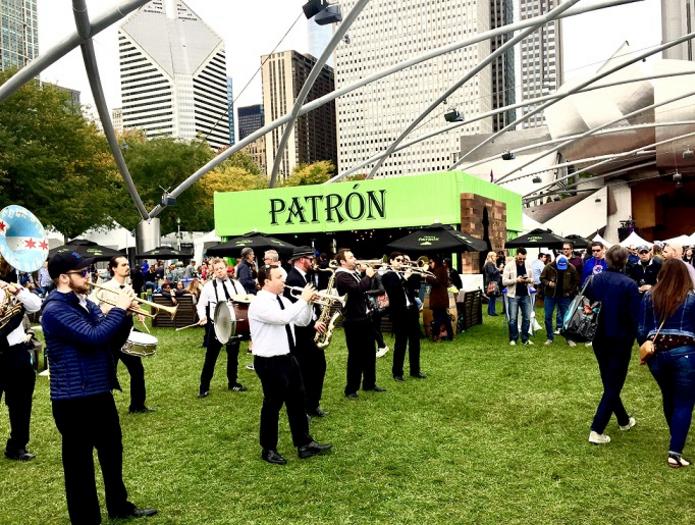 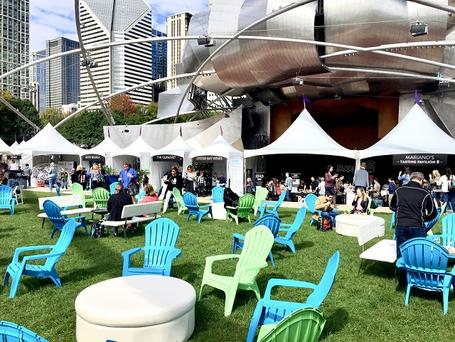 Live Louisiana jazz band performed for Chicago Gourmet guests as they browsed the wares of the many restaurants on-hand at the event on Saturday, September 29, 2018. This year's theme, "Rock the Fork," enlivened the tasting experience with live music throughout the event. (photo by Scott Elam).

Food and wine enthusiasts enjoy cuisine from Chicago's fine dining profile with bites from top chefs and restaurants across the city in the 11th annual Chicago Gourmet (photo by Scott Elam).

With the official opening of the event under way, cooking demonstrations by elite chefs followed on the Main and Culinary stages. In addition to Bayless, chef Joe Flamm from Spiaggia and Publican Quality Bread’s Greg Wade gave lively presentations.

As in previous iterations of the event, hundreds of chefs, master sommeliers, renowned winemakers and spirit producers dotted Millennium Park in the festival’s customary sparkling white tents presenting their specialties throughout the weekend.

Guests and attendees enjoyed endless servings of gourmet food, wine, beer and spirits throughout the park. Different from previous festivals was the additional injection of music of just about every kind, including live performances, with the variety of cuisine on hand, delighting food and wine enthusiasts throughout the weekend.

​Food from every corner of the fine dining spectrum offered temptations that left the most impulse-averse diner bereft of any will to deny themselves. My weaknesses this year were many. There was RL’s (at Ralph Lauren on Michigan and Chicago Avenues) mini Maine Lobster Roll with fresh Maine lobster dressed delicately with mayo, lemon and celery on a buttery roll. The dish offered quite a pleasing balance of hot and cold elements for an incredibly succulent bite. Another favorite was Old Crow Smokehouse’ (with locations in Wrigleyville and River North) savory 12-hour slow smoked brisket with house barbecue sauce and sweet pickled red onion, which executive chef Tony Scruggs insists, gives the barbecue its “pop,” an assertion, I can attest to. To wash the bite down sufficiently, the restaurant provided its signature front porch punch, made with home-made moon shine, something Scruggs tells me Old Crow sells more of than any other restaurant in Illinois. But many more delectable bites could be found in great number from sweet to savory and everything in between. One of my favorite deserts on the day, Stan Donuts’ cheesy popcorn donut bombs, stuffed with a heavy cheddar filling, frosted and dusted with bits of fluffy cheddar popcorn…scrumptious.

Of course, wines and spirits ruled the weekend as well. In addition to a host of vendors offering pourings of an array of varietals and liqueurs, the festival offered interactive wine and cocktail seminars by presenting sponsor Southern Glazer’s Wine and Spirits. Themes included Hitting the High Note, an Artist’s Look at Music and Wine; The Old Fashioned, New Again; and Let Them Eat Cake (And Drink Beer).

​Another special showcase, the BBQ, Beer & Bourbon Pavilion presented by Country Financial, featured more than 15 Chicago chefs, serving up barbecued goodness from around the city.

And, of course, on the festival grounds were a rotating cohort of musicians and bands from big band to mariachi creating a spectacular sensory celebration from start to finish.