The Chicago History Museum and DuSable Museum of African American History will join forces this summer to remember the race riots that altered Chicago’s sociopolitical atmosphere 100 years ago during 1919 Red Summer: Chicago Remembers. Artists and historians will lead the way in honoring the life of Eugene Williams and others affected by police brutality and segregation in Chicago. The event is free and open to the public on July 27, 2019.

Interdisciplinary artists, Jefferson Pinder and AJ McClenon, will join the event to engage Chicagoans in a performance on the beach as part of Pinder’s Red Summer Road Trip series. Inflatables crafted specifically for the event will allow participants to float on the lake together to memorialize the site of violence against Chicago teenager, Eugene Williams, 100 years later. Other program elements include a presentation by Julius Jones, assistant curator at the Chicago History Museum, and performances from Lethal Poetry, After School Matters and the DuSable Museum, Momma Kemba as Ida B. Wells, Avery, and Red Clay Dance Company.

​“The DuSable Museum of African American History is committed to sharing the poignant stories of African Americans in Chicago and beyond,” said Erica Griffin, director of education at the DuSable Museum. “We’re thrilled to partner with the Chicago History Museum to present ‘1919 Red Summer: Chicago Remembers’ to honor the lives of those affected during the Red Summer of 1919 and continue to encourage progress in our communities and around the world.”

​​“1919 Red Summer: Chicago Remembers” will take place on July 27, 2019 from 3-5 pm at Margaret T. Burroughs Beach. The event is free and open to the public. For more information, visit: https://www.chicagohistory.org/event/1919-red-summer-chicago-remembers/. 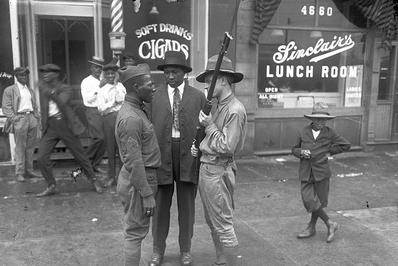 A member of the state militia faces off with an African-American veteran in the 1919 Chicago Race Riots, July 27, 1919 (photo courtesy of the Chicago History Museum).