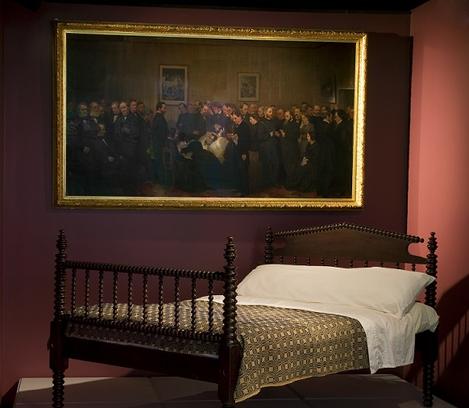 In His Own Words

New Chicago History Museum exhibition examines the life and impact of Abraham Lincoln through the words he left behind.

​The words of the 16th President of the United States, Abraham Lincoln, have echoed throughout the ages and still resonate with us today. While those words have been immortalized in the psyche of our nation, a new exhibition at the Chicago History Museum celebrates Lincoln’s courage, eloquence and magnitude in Lincoln’s Undying Words.

The new show highlights some of the most poignant language from Lincoln’s speeches delivered in the last seven years of his life and shaping the political landscape of a nation that was coming apart at the seams. The exhibit celebrates five key Lincoln speeches: A House Divided in 1858; his first inaugural address in 1861; his most famous speech, The Gettysburg Address, given in 1863; his second inaugural address in March 1865; and the speech on Reconstruction in April 1865, given three days before his assassination.

The exhibition was originally created for the 10th anniversary of the Abraham Lincoln Presidential Library and Museum in Springfield, Illinois last year. Olivia Mahoney, senior curator of the Chicago History Museum, first developed the anniversary exhibition and then elected to bring it up to the Windy City and integrate artifacts of from the Springfield museum with those integral to the Chicago History Museum’s own exhibitions on Abraham Lincoln.

​The result, as Mahoney explained, was seamless. “Everything really complimented each other,” she told me. Using Lincoln’s poignant words from those critical speeches was a unique way of telling the story of Lincoln’s evolving views on slavery and other crucial issues facing a struggling nation, Mahoney said. For Illinoians, Mahoney said, people are surrounded by the “myth, legend and lore” of Abraham Lincoln, and using his own words provided a novel approach to envision one of the nation’s most iconic presidents from the sole perspective of his own ideas.

“It’s interesting to see his response to these critical issues facing the nation and (it) allows us to think of him in a new way,” Mahoney explained.

While the exhibit is indeed the story of one man—albeit one of the most significant men of our nation’s early history—his was a story that was reflective of the powerful journey of a nation.

​Upon entering the exhibition, visitors will become immersed in the Lincoln’s life through centuries old artifacts, including the family carriage, which is on display at the museum for the first time in nearly three decades. Lincoln’s deathbed, which has been part of the museum’s own collection since the 1920s, is also on view, offering a powerful connection to one of our greatest presidents’ final moments. Other notable objects found in the exhibition include Lincoln’s last order to General Ulysses S. Grant. However, the core of the exhibition is not simply artifacts from Lincoln’s life, but the very words that communicated the soul of the man who would become the Great Emancipator.

When visitors walk through the exhibition, they will hear the voice of actor Michael Krebs bringing Lincoln’s very words to life, carving out a lens through which to better view the mindset of a nation on the brink of war with itself.

Krebs voice chillingly echoes Lincoln’s appeal to the Southern states in his first inaugural address, March 4, 1861: “We are not enemies, but friends. We must not be enemies. Though passion may have strained, it must not break our bonds of affection.”

And no exhibit on Lincoln would be complete without the short, but reflective words from his most famous speech, “The Gettysburg Address.” Lincoln’s poignant remarks from the dedication of the Soldier’s National Cemetery nearly five months after the pivotal battle in Pennsylvania, reiterated the principles of the Declaration of Independence and framed the U.S. Civil War as a struggle for freedom for all peoples and the principle of human equality.

​“…that from these honored dead we take increased devotion to that cause for which they gave the last full measure of devotion—that we here highly resolve that these dead shall not have died in vain—that this nation, under God, shall have a new birth of freedom…” said Lincoln that sorrowful day in 1863.

Mahoney pointed out that in his addresses, Lincoln was able to draw sensitively upon the nation’s past, all while keeping a keen eye on its future. She explained that he was a clear and logical thinker who was able to express himself in poetic terms that continue to resonate on many levels with people of this nation today.

In addition to Krebs’ readings, visitors will hear narratives providing context for each of the historical events for which Lincoln made these addresses. The narratives, combined with Lincoln’s words and the powerful artifacts in the exhibition, will likely prompt those who visit to take a deeper look into an embroiled in so much turmoil, yet spurring so much growth. Although museum visitors will only hear excerpts of Lincoln’s speeches, the full compliment of each speech is included in the exhibition, and in a supplemental guide available for $10.

Gary T. Johnson, president of the Chicago History Museum, noted that Lincoln’s words continue to challenge and inspire people to this day, and that that is what makes the museum proud to host this important exhibition.

​The exhibit is currently on view at the Chicago History Museum and runs through February 20, 2017.