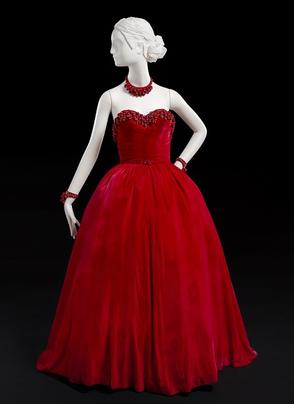 A new Chicago History Museum exhibition examines the life and career of America's first couturier and the Midwestern roots that influenced his path and legacy.

​This October, in its new exhibit Making Mainbocher:  The First American Couturier, The Chicago History Museum presents the life of legendary Chicago fashion designer Main Rousseau Bocher. While his name may not be familiar to many Americans, his designs helped to influence and define the feminine mystique of the post-war American decade. The new exhibition aims to shed light on the designer’s bold career choices and the Midwestern upbringing that influenced them. Says Petra Slinkard, curator of Costumes at The Chicago History Museum,  “The impetus for this exhibition is to share Mainbocher’s story, shining a specific focus on his Chicago roots—a  component of his story which many people do not know. His story is unique, and yet at the same time, very Chicago. It is a story of a self-made man who deified odds to achieve great success.”

Most commonly heralded as the designer of Wallis Simpson’s grayish-blue wedding dress (now commonly referred to in fashion lexicon as Wallis-Blue), Bocher’s creation gained notoriety as much for its sleek elegance as for its wearer’s scandalous marriage to Prince Edward, the Duke of Windsor, formerly King Edward VII, in pre-war 1937 England.  Prince Edward shocked the world when he abdicated his throne to marry the American socialite.

Main Bocher’s work with socialites like Wallis Simpson helped frame the designer’s future. Having became such a iconic designer that he merged his first and last names in 1929 in mode of his design mentors, Augustabernard and Louiseboulanger, Mainbocher’s creations would go on to influence a generation of American fashion as his designs played on the classic lines of the feminine silhouette, using exquisite detail and fabrics, with minimum decoration, to represent the American women in the post-war decade.

​While spending a majority of his early years in Paris, Boucher remained first and foremost a Chicagoan raised with Midwestern values and beliefs.  Born at the start of the Gilded Age (1890) on Chicago’s west side, he attended John Marshall High School and the Lewis Institute (now referred to as the Illinois Institute of Technology), where he first studied art.  His service as an intelligence officer in the American Expeditionary Force during the First World War delivered the designer to the heart of international fashion, the city of Paris.   Following the war, Mainbocher remained in Paris and secured a position at Harpers Bazaar as a fashion illustrator.  In 1922, he began his tenure as the Paris fashion editor for Vogue, and after years of service, in 1927, was promoted to the position of editor-in-chief of the French edition of the magazine.  It was during his time at Vogue that Mainbocher developed his distinct fashion perspective, which came to real fruition in 1929 when he made the risky move of leaving his editorial duties to open his own fashion house in Paris, The House of Mainbocher.

It was during this time prior to WWII that the Mainbocher “style” was born.  In 1934, he designed his signature boned strapless bodice and his iconic waist cincher.  The Mainbocher look was one that accentuated the feminine silhouette, with tiny waisted, pleated and skirted dresses.  Having fled Paris in 1940, prior to the Nazi seizure of France, Mainbocher’s signature look arrived in New York City (1940) a decade prior to Dior’ post-war “New Look.”   America’s socialites and Hollywood royalty of day became huge benefactors of the Mainbocher style, admiring its underlying French influence and American simplicity.

​Though Mainbocher lived nearly 25 of his most formative yearsin Europe, he always maintained his American citizenship and he never forgot those early Chicago influences that paved the way for his extraordinary rise within the industry.   Mainbocher was known to have kept in close contact with his former instructors at Chicago’s John Marshall High School.  In addition, true to his roots, when the James Ward Thorne School of Nursing at Chicago’s Passavant Memorial Hospital (now Northwestern) sought out the designer to create the new student nursing student’s uniforms, he accepted the challenge and contributed his work to the effort gratis.  Likewise, Mainboucher devoted time away from high fashion to design uniforms for the NAVY W.A.V.E.S. during the Second World War, as well as the official uniforms for the Girl Scouts of America, contrasting the glamour of his Paris and New York haute couture with the simplicity of these nationalistic projects irrespective of their impact on his expansive career.   Slinkard pointed out that this was part and parcel of who Mainbocher was as a designer and a person. “Mainbocher designed what he wanted, for whom he wanted”, said Slinkard. “And while he was a calculating business man, I think his decisions to take on designing uniforms for the U.S. military was one he considered to be an honor. After serving in the First World War, he was able to give back during the Second, in this way.”

​One of the signature elements of Mainbocher’s distinctive approach may have stemmed from his Midwestern roots. According to Slinkard, Mainbocher “was a minimalist before it was popular to be so.  I believe his standard for well-made clothing and the timelessness quality of his designs were an indirect result of his humble Midwestern upbringing.”

Of course, it is the designer’s Midwestern roots that frames Making Mainbocher.  A short film highlighting Mainbocher’s early education in the Windy City opens the exhibition. Stations within the exhibition will allow visitors to follow the trajectory of Mainbocher’s life, from his Chicago roots to his love affair with Paris to his rise within the New York fashion scene.  In addition, the museum will have 30 garments from its permanent collection on display, including a replica of the Wallis Simpson wedding trousseau, along with samples of the WWII uniforms he graciously designed.

Guests will also get an opportunity to explore their own fashion perspectives with the exhibit’s “design a dress” interactive model, allowing visitors to flip through sketchbooks featuring fashion illustrations of garments on view and use Mainbocher’s preferred colors, fabrics, and motifs to create designs of their own.  Using live projection mapping, guests will see their own design choices and garment creations come to life right before their eyes.

Finally, visitors will be able to immerse themselves within the life of the man through various fashion illustrations, photography, oral histories and videos of the designer and his inspirations.

Cumulatively, these elements of Mainbocher’s life tell the story of a Chicagoan and an American who never forgot his roots, who put country before career and principles before passion. Making Mainbocher is a window into the remarkable life experiences that culminated in the legacy of America’s first real couturier.

As Slinkard notes, the new show offers those familiar with the designer’s life and career an opportunity to peer more deeply into its elements and impact on the industry. For those who don’t know Mainbocher or his influence, “the exhibition will shed new light on the man and his impact on fashion history,” and that impact is something deeply rooted in hometown values and experiences--something 35 years in Europe couldn’t even erode.

Making Mainbocher opens at The Chicago History Museum on October 22, 2016.