Back in 1919, U.S. Attorney General A. Mitchell Palmer launched of series of searing attacks on suspected left-wing radicals called the Red Raids. In them, Palmer destroyed union offices, burned books and even smashed printing presses all in an effort to curtail free speech of those he deemed the enemy. That chapter in U.S. history represents just one of the many times when a fervent desire to protect our borders threatened to impede upon the civil liberties of U.S. citizens, marking a dichotomy, “defending” the nation by attacking its freedoms.

That dichotomy is the central focus of a new-to-Chicago exhibition that opened this spring at the Chicago History Museum called Spies, Traitors, Saboteurs: Fear and Freedom in America. The exhibit comes to Chicago as a finale to a well-touted tour that launched in 2006 at the International Spy Museum—the only public museum in the United States solely dedicated to the tradecraft, history and contemporary role of espionage.

The ability to maintain domestic security in changing and unpredictable times while preserving the value of our own civil liberties is something the nation has struggled with since its earliest days. Says Peter Alter, director of the Studs Terkel Center for Oral History at the Chicago History Museum, “Grounded in 19th and 20th century history, the charged content in the exhibition challenges each of us to consider how to strike the right balance between security and freedom in the 21st century…”

Through examination of a series of startling events in our history, when perceived threat to national security gave rise to fear-mongering and suspicion—ultimately threatening the civil liberties of U.S. citizen—Spies, Traitors, Saboteurs dissects the anatomy of nationalism as it intersects with political conflict.

The exhibition illustrates the evolution of public opinion; the impact on citizens; the response by U.S. law enforcement, counter intelligence and homeland security; and the challenge of securing the nation without compromising the freedoms upon which it was founded.

Events and periods explored in the exhibition go back as far as the War of 1812, which reveals that the struggle for balance between civil liberties and national security has been one that we’ve grappled with almost from the very beginning.

In many of these events, common threads seem to emerge that shed light on the nature of our fears and our reaction to the perceived threats that spawned them. For instance, in nearly every case examined in the exhibit, threats to national security sprang from within U.S. citizenry. In the capture of the city of Washington during the War of 1812, for example, British troops who torched major public buildings in Washington, D.C.—including the White House—were aided by information provided by several Americans.

Likewise, on July 30, 1916, when Manhattan was hit by massive explosions in New York Harbor, German secret agents who blew up a munitions depot—showering the island and the Statue of Liberty with shrapnel and debris—were also aided by American collaborators. Of course, threats to our nation’s security often loom from all sources, but those posed by perceived traitors seem to strike the public as most insidious and inspire swift (and sometimes harsh) response. After all, acts of German sabotage on American soil like the 1916 Manhattan bombing were what helped foster America’s entry into World War I. They also inspired the passage of the 1918 Espionage Act, a law still in effect today. And they brought about the establishment of the Federal Bureau of Investigation.

As demonstrated in the exhibition, domestic terrorism often inspires a call to action from nearly all sectors of our diverse society. When the home of Attorney General A. Mitchell Palmer was bombed by an anarchist. and plots for subsequent bombings were revealed, both the public and the government alike clamored for tighter law enforcement and more restrictive legislation for immigrants, resulting in the roundups, deportations, and public outrage associated with the now infamous Palmer Raids.

But, as the exhibition also points out, it's the fear of external enemy influence on components of U.S. society that often separates us, pitting American against American and summoning the most insidious, suspicion-fueled hatred eroding the unity that often guides a nation through its most turbulent times. Spies, Traitors, Saboteurs examines the period near the end of WWII, when the Kremlin harshly condemned American Communists for softening their commitment to a worldwide communist revolution. In response, the Communist Party of the United States snapped into action, ousting its moderate leader and reestablishing itself as a highly militant and subversive organization, and that fueled America’s fears that American Communists would become Stalin’s tool for the overthrow of the U.S. government.

One of the exhibition’s more poignant sections, entitled “Hate, 1866 – Present” focuses on the 1925 Ku Klux Klan march in our nation’s Capital. While its treatment of the Klan is much broader than the documentation of the hate group’s many violent acts during the Civil Rights Movement, the exhibition also focuses on the 1920s Klan because it was at that time that the group was fairly strong and widespread in many American towns during the decade. Peter Alter points out that, as a result, “the Klan’s particular brand of white Protestant supremacy seeped into everyday life in some areas of the country.” And that fear tested our country's tolerance for free speech for all, at all costs.

Often a knee-jerk reaction, freedom of expression is often the first line of attack when violence results from home grown terrorism, radical subversive groups or political radicals. In the section entitled “Radicalism (1886-1924), the exhibit discusses Chicago’s infamous Haymarket Affair. Of the subject, Alter explained, “Haymarket helps exemplify the growth of left-wing labor-based radicalism that grew in the United States. It also demonstrates, as do the Red Raids of 1919 and 1920 in that section, governmental leaders’ overreaction to these movements through harshly limiting these groups’ free speech rights.”

The exhibition concludes with one of the nation’s most heinous attacks in recent memory, the terrorist attacks of September 11, 2001, and how the U.S. government’s attempts to identify terrorists within its borders have changed the lives of U.S. citizens forever.

Spies, Saboteurs and Traitors supports each of these stories (and many more) with historic photographs, themed environments, interactive displays, film, artifacts and video. An audio tour further enhances the guest experience.

Visitors will be able to trace over 80 acts of terror that have taken place on U.S. soil from 1776 to present day with a timeline that includes the Revolutionary War plot to kidnap George Washington, the events of Bloody Kansas prior to the Civil War, John Brown’s Raid on Harpers Ferry, 1960s Church bombings in the South and the attacks on the World Trade Center in 2001.

Visitors will also have an opportunity to view an APL Badge and ID Card (1917) – carried by Operatives of the American Protective League (APL) who spied on their fellow Americans on behalf of the U.S. Justice Department during World War I; a replica of the Anarchist Globe Bomb (c. 1886), presented as evidence in the trial of the men tried in connection with the Chicago Haymarket riot; and fragments of the planes that hit the World Trade Center (2001)—recovered following the attacks on September 11, 2001 and used as evidence by the FBI in their ensuing investigation.

While the exhibition offers a glimpse into times and events that often polarized our country, it also helps to shed light on present day fears and efforts to block threats from within our borders and how we might better approach the threats that stem from within while balancing the protection of the freedoms we treasure.

Immigration raids, threats to free speech and governmental pressures that often overstep the lines that map out the civil liberties it is sworn to protect, these are all familiar concepts. Spies, Traitors, Saboteurs helps us to set a unique context yesterday that yields some objectivity over a subject that we must strongly consider in today’s own political climate. Said Alter, "Spies... sets the stage for (Chicago History) Museum visitors to discuss current events and vividly see the connections between the past and present.” And in doing so, helps point out a path we might pursue that helps achieve the goals of today, without repeating the mistakes of the past. 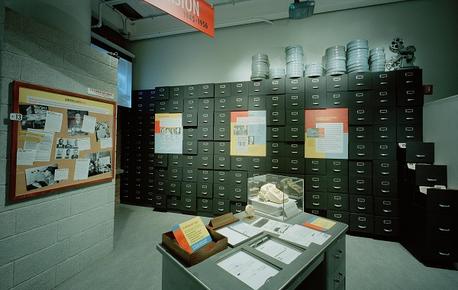 New exhibition at the Chicago History Museum examines the fear that leads to suppression when threats to our nation come from within it.