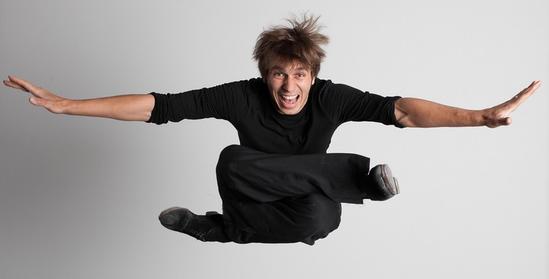 Chicago Human Rhythm Project (CHRP) has announced that world-renowned performer, choreographer and teacher Daniel "Dani" Borak is its new Artist In Residence (A.I.R.). Borak's three-year residency will be longer and more expansive in scope than previous CHRP artist residencies, with his responsibilities encompassing not only performing, teaching and choreographing but also artistic planning for multiple programs, beginning this spring.

CHRP Founder and Director Lane Alexander said, "I am thrilled Dani will spend three years with CHRP as a choreographer, teacher, performer and visionary, focusing his skills and talents on artistic planning and production. His abilities as a multi-form dancer connect directly to CHRP's first days in 1988 as a tap and contemporary dance men's duet company, which sought to cross lines and push boundaries. I can't think of a single dancer who is more suited to lead CHRP's artistic programming into its next phase of development. This is also important as it relates to the development of American tap in an institutional setting. There's almost no precedent of a tap 'company' undergoing leadership expansion. Tap dance has lived almost entirely in the commercial world, where the curtain closes and the show is over. The tap 'institutions' that exist are too young to have undergone this type of transition, which makes it new for American tap."

Borak made his first public appearances in his role as A.I.R. throughout the third annual STOMPING GROUNDS festival, CHRP's citywide series of free community performances and education programs culminating June 2 at the Studebaker Theater. Borak contributed three of his works combining choreographed and improvised material and, with other CHRP dancers, performed three classic tap works: Opus One by Harold Cromer, Laura by Buster Brown and Big Diesel Going North by Lon Chaney.

​For CHRP's summer festival Rhythm World's JUBA! Performance on July 21, also CHRP's annual Jubalee gala benefit, Borak is collaborating with Alexander to assemble a program that includes a U.S. premiere by Borak combining hip hop and contemporary elements, an adaptation of a work he premiered with his company, Tap Dan's Company, rearranged for CHRP tap dancers. Borak is curating and directing three other festival performances, including the opening night concert July 17 at the Jazz Showcase, the free concert July 19 at Navy Pier's new Polk Bros Performance Lawns and the second JUBA! concert July 22 at the Studebaker Theater.

CHRP Board Chair Mike Foster noted, "We have been impressed with Dani's growth as we've watched his development at our Rhythm World festivals. The board is so excited he has joined us, bringing the energy and creativity to move CHRP forward during the next several years."

From September 21 through 23, for CHRP's return to the Dance Center of Columbia College Chicago for the first time in more than 10 years, Borak plans to assemble a program featuring the first part of a world premiere multi-part conceptual work, along with Michelle Dorrance's Push Past Break, Lane Alexander's Prisms and works from the STOMPING GROUNDS and Rhythm World JUBA! performances.

​"I remember Dani when he was a teen at our summer festival doing his first solo," recalled former Board Chair Elaine Cohen. "I was absolutely blown away by his talent as a dancer and his charisma as a performer. Since then Dani has grown to be an incredible performer, director and producer. I can hardly wait to see the kinds of programs he will bring to CHRP!"

​Borak has developed an extensive list of artistic initiatives he will implement throughout 2018 and 2019, which CHRP will announce later this year.

Passionate about experimenting and collaborating with a broad spectrum of performing and visual artists, Dani Borak has already expanded the concept of traditional tap dancing, creating his own blended vocabulary pointing toward the future of percussive dance and rhythmic expression. A native of Switzerland (Winterthur), Borak has performed as a soloist around the world and has won 11 gold medals in many categories (six in solo male) at the tap dance world championships in Riesa, Germany. In 2014, he collaborated on the creation of Funny Feet (by Lukas Weiss Productions), a show that fused tap dance, juggling, virtuosic foot percussion and humor. Borak first came to CHRP's Rhythm World festival as a scholarship student in 2008, returning in 2010 and 2011. In 2014 and 2015, he came back as a guest teacher, performer and director before taking on the expanded role of Artist In Residence in 2017.

For tickets and information about CHRP and its programs, visit chicagotap.org.