The Chicago International Movies & Music Festival (CIMMfest) has announced its movie and music lineup for the eighth edition, running April 13-17, 2016 across 20 different venues in many of Chicago’s culturally-diverse neighborhoods including Logan Square, Wicker Park, Hyde Park, Lakeview, and Pilsen.

CIMMfest will hold a preview event on Thursday, April 7 with Deer Tick where they will premiere a trailer for an upcoming Deer Tick documentary by Will Miller.

The movie, Desire Will Set You Free, which anchors the LGBTQ programming, follows Ezra, an American writer of Palestinian and Israeli parentage, through Berlin’s queer and punk scenes. Additional programming highlights include a selection of TV documentary series such as PBS’ American Epic and family-friendly programming such as a sampling of short films co-produced with Facets Multi-Media.

Films with strong Chicago ties include The Night Smokers of Chicago, The Terry Kath Experience: A Daughter’s Journey, 1001 Afternoons in Chicago, Horn to the Heart: The Paul Butterfield Story, Savage Beliefs: The Movie, and 147 Pianos, featuring 200 Chicagoans.

Additional musical highlights at CIMMfest No. 8 include a kid-friendly concert with Lisa Loeb followed by a performance of her classics later that same evening, sound artist Tim Hecker, Moonface, Hip Hop artist David Banner and a tribute to J Dilla by Slum Village and Black Milk.

​CIMMfest will pay tribute to David Bowie with a retrospective of his film work. Films to be shown include Ziggy Stardust and the Spiders from Mars, which marked the “death” of Bowie’s Ziggy Stardust persona.

Gordon Quinn will be the fourth recipient of the CIMMfest BAADASSSSS Award to honor his career on Friday, April 15 at 7:00 p.m. at 1st Ward Chop Shop. Quinn, co-founder & artistic director of Kartemquin Films, celebrating its 50th anniversary, will be interviewed by Bob Hercules, a veteran television producer/director and a co-founder of Media Process Group. In addition to receiving this year’s BAADASSSSS Award, a retrospective of films with which Quinn has been involved will be shown, including Festival, the first music documentary to be nominated for an Academy Award; And This Is Free, about the legendary Maxwell Street Market; A Good Man, a documentary about legendary choreographer Bill T. Jones; and Prisoner of Her Past, which follows Chicago Tribune jazz critic Howard Reich as he journeys across the U.S. and Europe to uncover why his mother, Holocaust survivor Sonia Reich, believes the world is conspiring to kill her. Quinn will also present clips of his music documentary work with artists such as Bob Dylan and Phish.

​A full list of CIMMfest’s movie and music events are at CIMMfest.org. 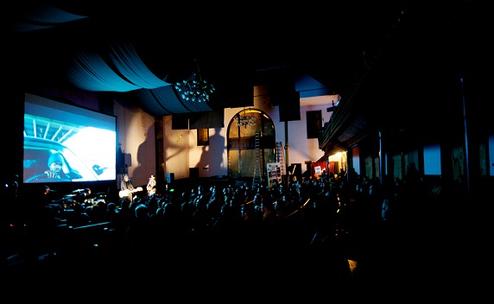 Screening of the film, Universal Love, at the 2015 CIMMfest (photo courtesy of the Chicago International Movies & Music Festival).