The project is an homage to composer, educator and NEA Jazz Master Gunther Schuller, who coined the term “Third Stream” in 1957 to describe music that combines both jazz and classical techniques.

“As part of our year-long 10th year anniversary celebration, this project supports the season’s overall artistic goal of highlighting the depth and breadth of the orchestra’s repertoire and also promoting Third Stream, a signature component of the CJP aesthetic,” noted CJP’s executive director, Birdie Soti.

Repertoire for “The Godfather of Third Stream: Gunther Schuller” traces the music of Third Stream from 1957 to present day, including works by the late William Russo, artistic director of Columbia College Chicago’s Chicago Jazz Ensemble (and a close mentor of Orbert Davis). The program highlight is the CJP’s first-ever commission: a new work by Daniel Schnyderr—a Grammy-nominated composer/performer with a dynamic reputation in both jazz and classical genres.

“Daniel is an incredibly talented classical composer and great jazz musician,” said Davis, “making him the obvious choice for the CJP’s first commission. He and I share a common approach to orchestral writing, so we personify the continuum of this genre that began with Schuller.”

Due to the CJP’s unusual orchestral structure, Schnyder’s jazz symphony will produce an aesthetic different from his previous orchestral work, which has primarily been performed using a classical symphony structure.

“I am excited to work with Orbert Davis and the CJP on this project,” Schnyder said. “The CJP musicians are unique in that they easily inhabit both the jazz and classical worlds. This provides me with a wonderful opportunity to create a ‘concerto for orchestra’ that will take music to a new level.”

For CJP, the jazz rhythm section (piano, bass, drums) serves as the core of the orchestra, anchoring the full tonal colors of a symphony orchestra (strings, woodwinds, brass, percussion, harp). Schuller recognizes CJP as being one of two orchestras in the world presenting Third Stream on such a large scale (the other being the Metropole Orkest in Holland).

Related programming includes a pre-concert public appearance by Davis, Schuller and Schnyder in a lively and important discussion on the topic “The Rebirth of Third Stream,” which will educate audiences on the intricacies of the Third Stream genre. 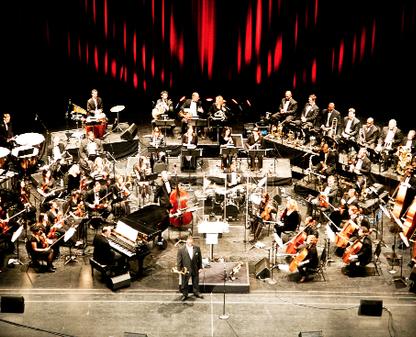