On September 29, theMART, with the City of Chicago, welcomed the public to experience Art on theMART, the largest permanent digital art projection in the world, for the first time. A crowd of over 32,000 people filled Wacker Dr. in Downtown Chicago to view the inaugural projection. The projection program, featuring digital artwork by contemporary artists Diana Thater, Zheng Chongbin, Jan Tichy and Jason Salavon, began shortly after dusk and ran for 34 minutes—culminating in a one-minute pyrotechnic display. This expansive permanent piece of public art continues Chicago’s legacy of providing both residents and visitors with exceptional art that is both free and accessible to all.

“Art on theMART is a visionary project that brings Chicago’s legacy of public art and iconic architecture into the future,” said Mayor Rahm Emanuel. “More than 32,000 people came out to witness history at tonight’s launch event, as one of Chicago’s most prominent buildings lit up with the largest curated art projection in the world. I want to thank Vornado, theMART, Terra Foundation for American Art, the Department of Cultural Affairs and Special Events and the many others who took part in helping reshape the way people interact with the Chicago River,” he added.

​​“TheMART and Vornado Realty Trust are thrilled with the success of the inauguration of Art on TheMART, a gift to the people of Chicago, who widely embraced this monumental new platform for public art,” noted Art on theMART Executive Director Cynthia Noble. “We are proud of the works by the initial risk-taking artists—Diana Thater, Zheng Chongbin, Jason Salavon and Jan Tichy—and look forward to welcoming a range of perspectives over the next thirty years.” She added, “We thank the City of Chicago, especially Mayor Rahm Emanuel, Department of Cultural Affairs and Special Events Commissioner Mark Kelly, 42nd Ward Alderman Brendan Reilly and our launch partners Obscura Digital and the Terra Foundation for American Art.”

​Following the launch event, the projections will now be displayed for two hours a night, five days a week (Wednesday – Sunday), for ten months of the year (March – December). Projections will be visible to the public from Wacker Dr. and along the Chicago Riverwalk. The program content will rotate every season, and will be selected with the assistance and expertise of the Curatorial Advisory Board. The City of Chicago and theMART will work in partnership to manage and curate the projected artwork over the course of a 30-year agreement. Privately funded by Vornado Realty Trust, owner of theMart, Art on theMART marks the first time a projection of its size and scope will be completely dedicated to digital art with no branding, sponsorship credits or messaging.Artists for the inaugural program of Art on theMART were selected by theMart in consultation with a Curatorial Advisory Board shaped by theMart and the City’s Department of Cultural Affairs and Special Events. Two of the selections were made in partnership with the Terra Foundation for American Art as part of Art Design Chicago, a year-long celebration of Chicago’s art and design legacy. 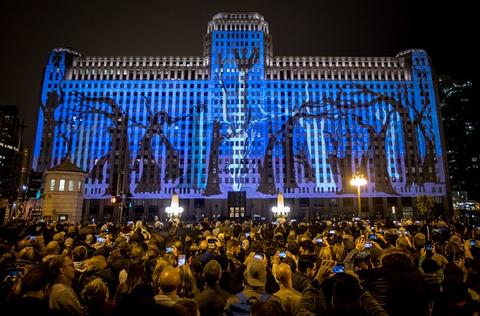 Art on TheMart launches in downtown Chicago on September 29 at the Merchandise Mart on Wacker Drive (photo courtesy of the City of Chicago).