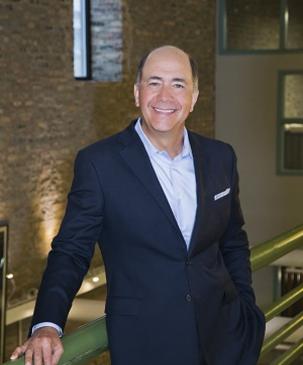 Dean Lane, area general manager of Hiltons of Chicago and the Palmer House (photo courtesy of The Chicago Loop Alliance).

The Chicago Loop Alliance Foundation has announced that on Friday, September 20, it will honor Dean Lane, area general manager of the Hiltons of Chicago and the Palmer House, with its Illumination Award at its 15th Annual Illumination Gala. The Illumination Gala will take place from 6:30-11 p.m. at the Hilton Chicago.

Dean Lane was selected as the Illumination Award recipient not only for his dedication to Chicago Loop Alliance, but also for his service to the City of Chicago and its hospitality and tourism community. The Illumination Award is meant to highlight civic and community leaders who, through their ideas, leadership and counsel, have enhanced the experience and well-being of Loop businesses, residents and visitors.

As a former Chicago Loop Alliance Board Member and current State Street Commissioner, Lane has played an instrumental role in the success and growth of the Loop. Beyond those posts, he is widely recognized as a passionate community partner and ally for many of the city’s non-profit organizations. From his involvement with the Ronald McDonald House Charities and Hospitality Hires Chicago to his commitment to connecting students to theaters and cultural institutions, he ensures that the Loop remains accessible and welcoming to residents from neighborhoods from across the city.

​“When we think about people who exemplify the qualities of an Illumination Award honoree—leaders who make the Loop a better place for everyone—Dean Lane is always top of mind,” said Michael Edwards, President and CEO of Chicago Loop Alliance. “We have worked closely with him over the past decade that he’s served as a State Street Commissioner and been involved with Chicago Loop Alliance as a board member, committee member and supporter, and we are so thrilled to give him the recognition he deserves for all the amazing work he does in this community.”

Dean Lane currently sits on the board of the Illinois Hotel and Lodging Association, where he served as chairman in 2017. He is a State Street Commissioner overseeing Special Service Area #1-2015, for which Chicago Loop Alliance is the sole service provider. He also previously served on the board of the Ronald McDonald House Charities of Chicagoland and Northwest Indiana, Harold Washington College Hospitality Advisory Board, and Chicago Loop Alliance Board of Directors. Lane was awarded the Illinois Hotel & Lodging Association Hotelier of the Year in 2014 and named the 2015 Historic Hotelier of the Year by the Historic Hotels of America, a program of the National Trust for Historic Preservation. He is also involved in a number of other advocacy organizations and charitable causes, including Chicago Cook Workforce Partnership’s Hospitality Hires Chicago, Epic Academy, and Camp Kids are Kids Chicago.

​Each year, the Chicago Loop Alliance Foundation hosts its Illumination Gala to fundraise for public art projects and programs, including its popular Activate summer pop-up event series. Information on tickets, sponsorships and more can be found at www.loopchicago.com/gala.