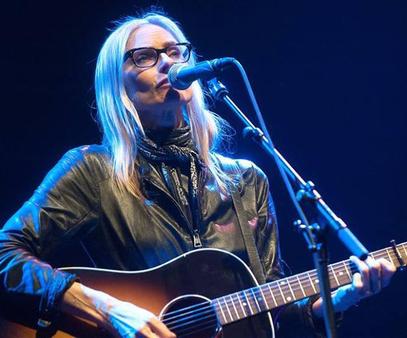 September 23, 2017 - Acclaimed singer/songwriter Aimee Mann played to a mostly adoring crowd at Dominican University’s Lund Auditorium Saturday night with a set of songs from her most recent album, Mental Illness, and as the title suggests, many of the songs performed touched a nerve most of us can’t often ignore. Like the dull pain of a tooth that somehow satisfies an odd itch, Mann’s songs of disappointment and loss seemed to hurt so good, unearthing themes from the darker side of life and exploring some of the most common pains.

A folk rocker who found her initial fame in the 1980s with the band ‘Til Tuesday, Mann has gone on to forge a well respected solo career that has established her as one of NPR’s “Top 10 Living Songwriters,” alongside such luminaries as Paul McCartney, Bruce Springsteen and Bob Dylan. The New York Times has dubbed her “one of the finest songwriters of her generation.

Saturday night’s performance kicked off with an opening from singer/songwriter and humorist Jonathan Coulton, an acclaimed artist in his own right on Mann’s record label, Superego. Coulton performed several tracks from his most recent album, Solid State, a satirical work that lives in the realm of SiFi, futuristic irony. Song’s like “My Millionaire Girlfriend,” about a husband looking for a wealthy third to compliment his marriage (with permission, of course, from his “beloved,”); or “You Ruined Everything (in the nicest way),” an ode the painful rewards of fatherhood, charmed an appreciative Lund Auditorium audience.

Mann’s set, which followed, included some of the diversity for which she is well known. Rock tunes like “Moth” and “Stuck in the Past” showcased Mann’s edgy, yet tonally layered touch. Her most reflective songs struck melancholic with slow, crawling rhythms and Mann’s signature textural intricacy. With fiddle, acoustic guitar, keyboard and synthesizer, and even sleigh bells in track, Mann understands just how to create depth through layers.

Her mildly haunting mid-set song, “You Never Loved Me,” struck a particularly poignant tone for the evening. But her most effective performances of the night seemed to spring from her acoustic works like “Rollercoasters,” the sweet, sentimental duet performed with (and co-written by) John Coulton.

​Still story-telling is the theme that cements Mann with her loyal audience. Songs like “Humpty Dumpty,” which tells of life’s broken things (relationships, dreams and things held close to the heart), that just can’t be put back together again, that is where the heart of Mann’s appeal lies, and that is what brings fans out time and time again, waiting for that moment she can strike a chord that resonates so poignantly, and make us hurt so good.