October 6, 2017 - Lyric Opera has kicked off its new season with a bang this fall in a splendid, new production of Christoph Gluck’s poignant Orphée et Eurydice. The effort’s success has had more than a considerable amount of help from a collaboration with Joffrey Ballet and acclaimed choreographer John Neumeier, adding a wealth of emotional depth and volumes of artistic merit to an opera heaving with emotion.

The story, based on a version of the tragic Greek myth of the same name, recounts the passionate quest of Orphée, who sang with such beauty he was able to charm the Underworld into releasing his beloved, deceased bride, Eurydice. And that is just what he does, but not without a catch, a catch that introduces a healthy dose of drama.

A well-lauded director of the Hamburg Ballet, Neumeier is no stranger to drama. Tension and contrast were hallmarks of his choreography, which was commissioned by the production’s co-presenters, Lyric Opera of Chicago, Los Angeles Opera and Staatsoper Hamburg.

​The story is set in modern day, where Orphée is the choreographer of his own ballet company (depicted by the elegant dancers of The Joffrey). The star of his troupe is also the love of his life, Eurydice, but his star and wife is petulant, self-absorbed and unfocused. After a rather indiscreet lovers' spat during an afternoon’s rehearsal, Eurydice storms out and is suddenly killed in a horrific car accident, setting in motion the tragic journey of a man desperate for a chance to get back the love of his life by any means necessary.

In a vignette that I’m still unsure was meant as fantasy or reality, Orphée, with the encouragement of his assistant (the Cupid figure) Amour, descends into the Underworld on a perilous quest.

​​Russian tenor Dmitry Korchak sang Orphée with verve creating a figure pained by loss but also enraged by it. This rage is where Korchak’s bright tenor voice shined most vividly. The spirited, staccato runs of Gluck’s first act arietta, L’espoir renait dans mon ame, showcase Korchak’s brilliant, agile voice. It’s most impressive in its upper range and is well suited to the work’s fiery, Italian style. It was only in Korchak’s lower register work that we saw any limitation in his singing.

Once Orphée beguiles the Furies into returning Eurydice, he is presented with that catch upon which their fate hinges. Until they make their way back to Earth, he cannot so much as look upon Eurydice without dire consequences. This unbeknownst to Eurydice, which creates serious complications along the way.

One of the most lovely vocal moments came in the third act when the couple reunites before their journey back to Earth. Despite having traversed the terrors of the Underworld to win her back, Eurydice believes Orphee’s reluctance to look at her means he no longer loves her, leaving her to conclude that death is a better fate, while a tortured Orphee must struggle to conceal his quandary in silence. Chuchman sings the third act aria, Che fiero momento, with a weighty gravitas that makes Eurydice’s pain ever more palpable.

Of course, Orphée relents and gazes into her eyes reassuring her of his love, but that gaze costs them her life.

Back on Earth, Armour (sung with charm and agility by soprano Lauren Snouffer) comforts an inconsolable Orphée and convinces him that Eurydice will indeed live on in his work. The Joffrey (as Orphee’s troupe) then take the stage to perform Neumeier’s interpretation of that work, a lovely, life-affirming, celebratory dance brimming with spirit and triumph.

Orphée et Eurydice runs at Civic Opera House through October 15. Get your tickets before it’s too late. 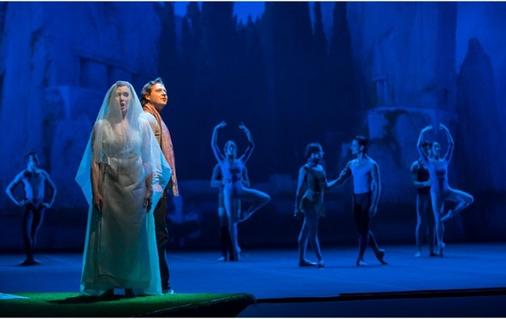