This winter, Chicago Opera Theater (COT) will present Elizabeth Cree, a suspenseful and thrilling tale set in Victorian London, based on the novel “The Trial of Elizabeth Cree” by Peter Ackroyd. Pulizter Prize-winning composer Kevin Puts and librettist Mark Campbell have reunited for this world-premiere, co-produced with Opera Philadelphia, telling the story of a woman on trial for her husband’s grisly murder. This production features music direction by Geoff McDonald, stage direction by David Schweizer, and stars Katherine Pracht in the title role.

“COT is committed to bringing innovative opera to Chicago, including developing new work that will become part of the canon of great opera in the future,” remarked COT’s general director, Douglas Clayton. “This will be the first time Chicago will have the opportunity to hear the masterful work of Kevin Puts and Mark Campbell, giving our community the chance to experience the artistry of these talented collaborators as they tell the suspenseful and thrilling tale of Elizabeth Cree.”

Puts and Campbell weave the story of Elizabeth’s days performing in an English music hall, the people she meets, and the slayings that begin not long after she joins the troupe. On trial for her husband’s murder, her case is complicated by the discovery of her husband’s diary and the shocking details it reveals. Historical luminaries including George Gissing, Dan Leno and Karl Marx all make appearances in the dark and delightful world premiere production, set against the gas-lit backdrop of Victorian London.

“It is a thrill to bring this riveting story to life for the operatic stage,” noted Kevin Puts, who has been heralded by The New York Times as “a brilliant composer with a strong musical voice.” “Elizabeth Cree is fast and furious, moving from scene to scene with the pace of a thriller, and I have delighted in working to provide a seamless and organic flow to it all.”

The cast stars Katherine Pracht as Elizabeth Cree, Christopher Burchett as John Cree, Richard Troxell as Dan Leno and Levi Hernandez as Inspector Kildare. Lighting and video design for the production are contributed by Alexander V. Nichols and set and costume design are provided by David Zinn. 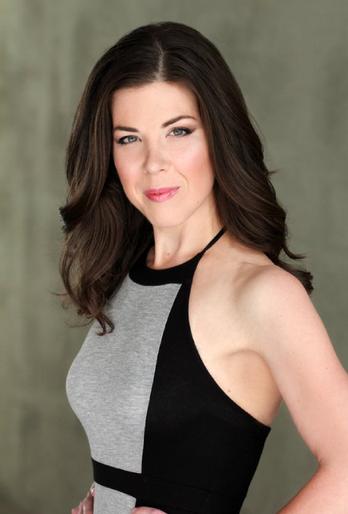 Soprano Katherine Pracht will star in the title role of the world premiere of Elizabeth Cree by Kevin Puts at Chicago's historic Studebaker Theatre (photo courtesy of Ms. Pracht).